It was no ordinary rehearsal. As members of the Brown University Orchestra assembled in Sayles Hall, a large crowd gathered to watch famed pianist-conductor Daniel Barenboim, below, and a soloist from the Berlin Philharmonic work with them. “Music teaches you so much about how to live in society,” Barenboim told students. “When you play, it has to be with full and total commitment. Whether you play professionally or only occasionally, you must play with everything that is in you.” 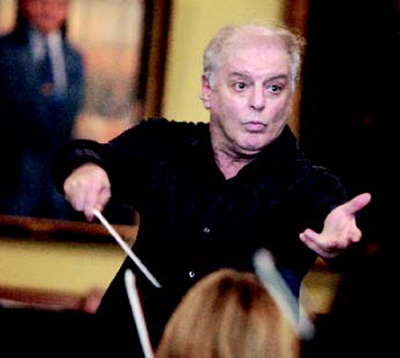 On campus for four days in December, Barenboim brought with him the nearly 100-member Arab-Israeli student group, the West-Eastern Divan Orchestra. An Israeli citizen since 1952, Barenboim conceived the project with the late Palestinian scholar Edward Said, hoping a love of music could help young players overcome fear and suspicion of “the enemy.”

Can music bring peace to the Middle East? “Of course not!” insisted Said’s widow, Mariam Said, at the screening of a documentary about the project. “This is a humanitarian project, an experiment in coexistence. It will not solve political differences.” Still the group has played in Ramallah, and after a concert at the Veterans Memorial Auditorium in Providence it played Carnegie Hall and then at the United Nations’ farewell gala for Kofi Annan. —Simone Solondz

Reader Responses to The Conductor’s Commitment