To Build a Better Batmobile

It’s hard to see a bat fly up close. They go about in darkness and can move so quickly—up to forty-nine feet per second—that the human eye simply cannot discern them as anything but a blur. And if you do happen to find yourself around a flying bat, you’re most likely to duck, close your eyes tight, and hope you don’t get bitten. 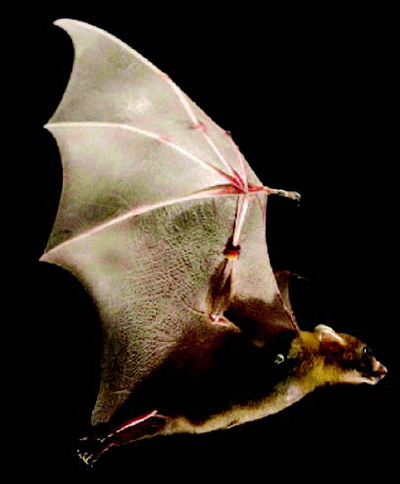 But Brown professors Kenny Breuer ’82 and Sharon Swartz will be lucky enough to spend the next year watching bats fly up close and personal. Their work involves placing bats into a wind tunnel where the creatures fly into an air current, flapping their wings but making no headway—effectively suspended in mid-air. Meanwhile a video camera snaps pictures at a rate of 1,000 images per second.

Swartz, a professor of evolutionary biology, finds bats beautiful as well as technologically fascinating. Their wings, which can be anywhere from an inch to three feet long, have as many joints as the entire human arm and hand, which makes them extremely flexible. On the upstroke, for example, the wings retract to just 20 percent of their full length, and look like a “folded piece of origami paper with barely any surface at all,” she says. This gives them maximum thrust power on the downswing as they extend their wings again.

Bats can also catch prey in mid-air and turn on a dime. “Their turning radius is about the size of their head,” says Swartz. Such a rapid about-face, performed by the bat at full speed, is “hard to explain by any known laws of aerodynamics,” she says. But that agility may help explain the evolutionary success of these flying mammals. Of the 5,000 different species of mammals on the planet, 1,300 are bats.

Swartz’s research partner, Kenny Breuer, is an engineer who believes it may one day be possible to develop an airplane modeled, however loosely, on bat flight—a Batmobile if you will. “My prime motivation for doing this research is to understand how nature’s fliers do what they do, and to take inspiration from bats in developing engineered flight vehicles,” Breuer says. Imagine an airplane whose wings can not only flap, but are flexible enough to bend and twist and expand and retract as needed.

Now imagine a bat-shaped contraption with a surveillance camera attached, which is able to navigate tunnels, alleyways, or even inside office buildings. These bat machines could serve as crime fighters, capturing criminal activity on video (whether this is desirable is another question). One of the sponsors of Breuer’s and Swartz’s work is the U.S. Air Force, which, according to Swartz, would like to develop a fleet of small, unmanned reconnaissance vehicles that can shoot across the sky so swiftly that they would be mistaken for birds.

Reader Responses to To Build a Better Batmobile