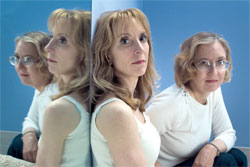 The day John F. Kennedy was assassinated became a splitting point in the lives of twin sisters Carolyn Spiro and Pamela Spiro Wagner. When word spread through their sixth-grade classrooms that Kennedy had been shot, Spiro couldn’t understand why the adults were so upset. Wagner, however, began hearing voices whose meaning she gradually deciphered: she had helped kill the president.

In this moving and courageous memoir, Pamela Spiro Wagner painstakingly describes the experience of living with schizophrenia. In alternate chapters, Carolyn Spiro bears witness to frustration over treatments and relapses, hope during periods of improvement, and the illness’s effect on the family. The twins’ responses to JFK’s assassination foreshadow two major threads in the book: the intertwined yet radically different paths the girls’ lives take, and their insights into what mental illness feels like from both within and without. 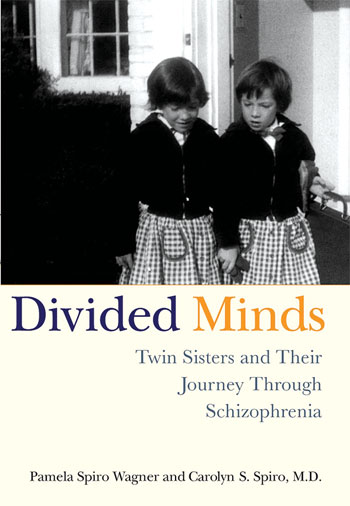 In adolescence, Pamela Spiro becomes withdrawn, dangerously thin, and often forgets to bathe or change her clothes. These warning signs are masked by the fact that Carolyn, too, is shy and they crash-diet together. Plus, Pam is a good student. And most important, she tells no one—not even her beloved twin—about the voices. The two enter Brown together in 1970. It is only years later, after multiple hospitalizations and more than one suicide attempt, that Wagner finally confesses to a psychiatrist the extent of her symptoms and is diagnosed with schizophrenia. Although Spiro is by then a psychiatrist herself, schizophrenia had never crossed her mind. She had thought her sister seriously depressed.

In Divided Minds, Wagner and Spiro candidly depict a relationship shot through with intense love and intuitive connection as well as competition and ambivalence. Wagner’s illness, however painful, creates an opening for the long-overshadowed Spiro, who always saw her sister as the more brilliant and ambitious. Spiro’s decision to become a psychiatrist adds yet another layer to the relationship. One day she sees Wagner in the hospital and barely recognizes her in the “pudgy middle-aged woman,” who “mutters to herself and gesticulates with wild, yellowed fingers, the movements snaking and purposeless, as she paces back and forth.

In counterpoint, Wagner recounts her paranoid delusions with harrowing lucidity. Even more striking is the double consciousness she brings to her narrative. At one point, hospitalized, she thinks a SWAT team is after her. Heart pounding, she piles on all her clothes and prepares to make a run for freedom—only to find a quiet, empty hallway when she screws up her courage and opens the door. Instead of being comforted that there is no real threat, Wagner feels devastated by this confirmation that her own mind is an unreliable source of terror and torture.

Perhaps the most valuable aspect of this book is the human face the authors put on schizophrenia. Wagner is a gifted writer who describes the thrill of poetry after yet another hospitalization: “It is as if a long-barred door has swung open and I am given a vision of an unimaginably lovely landscape: poetry, poetry! like the deep crimsons and gold-veined ochers of buttes rising above the tableland of the ordinary.” Despite being hospitalized nearly seventy times for a total of eight years of her life so far, she graduated from Brown, completed a year of medical school, and has won awards for her poetry and journalism.

The epigram to Divided Minds reads “Dum Spiro, Spero. While I breathe, I hope.” This story begins and ends with hope, but it also raises questions: What quality of life lies ahead for Wagner and others like her? When will better treatments be developed that might spare individuals from the suffering that Wagner and her family experience and help others with mental illness live up to their full potential?

Kara Provost is an associate professor of liberal arts at Montserrat College of Art.