What would you do if your sophomore year in college your brother died in a plane crash? What if he was twenty-five and endowed with such charisma and ambition that everyone who met him seems to have shared his conviction that he would be one of the Great Writers of 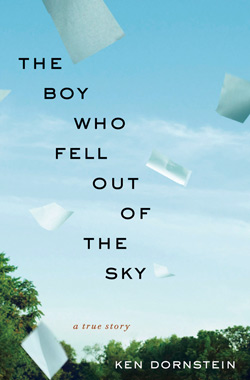 His Generation? What if his airplane was blown to bits over Lockerbie, Scotland, in what was at the time the most sensational act of terrorism the world had witnessed? And what if a rumor got out that he was carrying a manuscript - the book for which he had been obsessively scrawling ideas in dozens of spiral-bound notebooks over the years? Then add this clincher: What if you not only inherited your brother's notebooks, but married his former girlfriend as well?

The Boy Who Fell Out of the Sky, a new book by Ken Dornstein ’91, is in part a biography of his brother, David '85, who died over Lockerbie. But that story is wrapped in a memoir and told like a love letter. In the mire of half-baked confessions that have made memoir a dirty word lately, this book comes as a relief. Dornstein may be wrestling with the same old demons, but he is a funny, modest, and exceedingly polite guy who reveals himself, his friends, and his family reluctantly. What he calls his Leviticus 18 problem - "Do not uncover the nakedness of you brother's wife; it is the nakedness of your brother" - becomes a running joke.

When flight 103 exploded over Lockerbie, Ken Dornstein was just nineteen, home for winter break with his father, Perry '56, in Pennsylvania. They were expecting David, who'd been traveling in Israel, to join them later in the week. Then Pan Am officials called with the news that David Dornstein was on flight 103's passenger list.With that news, Ken lost not only his innocence but also nearly twenty years of his own life.

David had been a charismatic presence at Brown, visible on stage and in the pages of the Brown Daily Herald, where he wrote a popular column. A creative writing concentrator, he had a captivating grin, electric-blue eyes, and improbably long, curled eyelashes. Although he barely finished his degree and made a literary specialty of writing contrite letters to his professors, his ever-present notebooks were full of advice to his biographers. "He wanted to make things easy for them," Ken says with a smile. David also recorded dreams of dying young - in plane crashes or train wrecks. "I don't think it was prognostication," Ken says. "He figured dying young would help his literary reputation."

After graduation, David spent a summer in Israel and then moved to New York City, where he worked as a copy editor for a law firm, an errand boy, and a room-service waiter at the Ritz Carlton. He spent his off-hours smoking and writing in coffee shops, seducing women, sleeping on the floor, and generally ignoring his health and hygiene. He returned to Israel in the summer of 1988 and was on his way home when Libyan terrorists blew up his plane.

His senior year at Brown, though, he had run into David's off-and-on girlfriend, Kathryn Geismar '85, in Penn Station. They went to dinner, became friends, and embarked on a secret long-distance love affair. Under the strain, Ken broke it off. Although he planned eventually to write David's story, Ken figured he'd do it when he was old; in the meantime he'd write a few books for practice. The first, a history of insurance fraud called Accidentally, On Purpose, came out of his work as a private eye.

Gradually he came to see that by postponing David's book he was postponing his own life: he couldn't make a commitment to Kathryn, with whom he was involved once again, or become a father, or even choose a career of his own if he didn't deal with David first. So began what he called the Dave Oral History Project, tracking down the friends and acquaintances whose names appeared in the notebooks. He traveled to Lockerbie and wrote an essay about it that the New Yorker published on the tenth anniversary of the bombing. Random House editor Jon Karp '86, who had known David at Brown, read it, and offered Ken a book contract.

Now married with two children, Dornstein and Geismar live in Somerville, Massachusetts. Kathryn is a therapist, and Ken is a series editor at Frontline, the PBS documentary program. For several years now, he has been taking the occasional leave of absence from work and creeping upstairs at night to his spartan third-floor office to write his brother's biography.

In January he invited me up to see David's notebooks. Their covers are pasted with tabloid headlines, and David's bold scrawl packs each page, leaving no margin unchallenged. In contrast, Ken's orderly black loose-leaf binders are labeled "The Dave Notebooks," their contents computer printed and color-coded for chronology and cross-referencing. From a crawl space under the eaves, Ken pulled a poster-board map he'd made of the Lockerbie crime scene, with variously colored pins marking the sites where the bodies were recovered. The passengers in Pan Am's pricier Clipper and first-class sections landed in an idyllic pastoral setting, he observed ironically, while those in coach crashed into a grim blue-collar neighborhood. One of those bodies was his brother's.

Charlotte Bruce Harvey is the BAM's managing editor. Ken Dornstein has created a Web site for recollections of his brother, David, at www.boywhofelloutofthesky.com.