A Life of Service

Frederick Lippitt, the senior fellow of the Brown Corporation, died on May 11 at his home in Providence. Known to many at Brown, he funded the annual Anton/Lippitt urban affairs conference at Brown’s Taubman Center for Public Policy and created a public service award for graduating public-policy concentrators. Lippitt, who was eighty-eight, won the President’s Medal, the highest award a Brown president can bestow, in 2004. 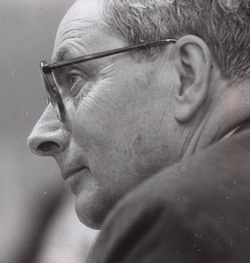 John Foraste
Lippitt at the Faculty Club in 1983.

He was a Corporation trustee from 1963 to 1970 and a fellow from 1979 until his death. As senior fellow since 1998, he administered the oath of engagement to acting president Sheila Blumstein and to president Ruth Simmons. He was the last fellow to serve with a life term. Brown awarded Lippitt an honorary doctorate in 1977.

Over the years Lippitt funded many scholarships , both at Brown and elsewhere. “His work provided financial opportunities for dozens of people who otherwise would not have been able to attend college,” says Darrell West, who heads the Taubman Center. “And he often did this quietly.”

A moderate Republican member of the Rhode Island House of Representatives from 1961 to 1983, Lippitt represented the East Side and was longtime minority leader. He went on to run three unsuccessful campaigns for Providence mayor, losing one race, in 1984, by only 121 votes. He later became a city Housing Court judge and an adviser to Mayor Vincent A. “Buddy” Cianci. He was also managing partner of the Providence law firm Edwards and Angell.

Lippitt chaired the Rhode Island Board of Regents for elementary and secondary education and was former chairman of the Providence Plan, a nonprofit he started in 1992 to revitalize the city. He helped create Rhode Island Hospital and Women and Infants Hospital.

A Yale alumnus, he served in the U.S. Army during World War II, receiving a Bronze Star and Purple Heart, and the Korean War.

Lippitt is survived by a sister, Mary Ann.

Reader Responses to A Life of Service