And Now a Song for Himself

As one of R&B's most prolific songwriters, Gordon Chambers '90 has penned hits for everyone from Aretha Franklin and Whitney Houston to Queen Latifah and Beyonce. He won a Grammy in 1995 for his Anita Baker ballad, "I Apologize." His childhood idol, Stevie Wonder, once serenaded him with one of Chambers's own songs. After a decade in the business, he seemed to have done it all. But Chambers longed to write for still one more singer - himself. 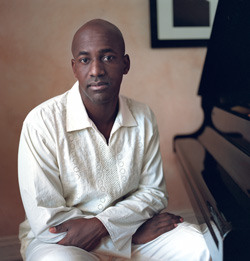 "I always wanted to do my own album," Chambers said in a recent phone interview from his home in Brooklyn. "Opportunities had come up before, but there was always something that didn't work out." Then, a few years ago, inspired by the resurgence of adult contemporary music by such artists as Norah Jones, Chambers decided it was time. He searched his catalog for songs that might play well in his soulful tenor, refined his sound through performances in New York City clubs, and last January released his debut album, Introducing... Gordon Chambers, on his independent label, Chamber Music.

The album is classic R&B, influenced by Chambers's childhood love of Motown and his more recent passion for jazz. "I listen to a lot of jazz," he said. "Cole Porter, all the standards. When I compose, I'm trying to write standards, songs people will want to record over and over again."

An American civilization concentrator at Brown, and a former entertainment editor for Essence, Chambers approaches his compositions from a literary perspective. "Songwriting can be quite journalistic, because you're trying to tell a story to a wide audience," he said. "I love words and emotions and stories. You put a good melody on it, and it's like a real hot fudge sundae."

Chambers describes the process of writing songs for other artists as fantasy. He sizes up singers, gets a feel for their attitudes, and imagines himself in their shoes. Selecting songs for his own album was a much more personal experience. "I had over a thousand songs to choose from," he said. "I wanted to pick ones that rang true for me, that allowed me to express a part of myself."

In the opening track, "Touch You There," Chambers speaks from his experience of being single in New York. "It's my 'Eleanor Rigby,' " he said. "I'm singing to the lonely person." "I'll Miss You Most," a ballad he says is the heart of the album, explores the recurring theme of unrequited love. And with the upbeat anthem "Always Be Proud," Chambers pays homage to his family's strong Jamaican roots.

"These were songs that only I could sing," said Chambers.Ê "They fit, like a good pair of jeans."

Reader Responses to And Now a Song for Himself