How One Man's Research Turned Political

In August, Ralph Miech, a retired professor of pharmacology, found himself at the center of a political firestorm. It all started after he published an article in a medical journal, the Annals of Pharmacotherapy, proposing an explanation for the septic-shock deaths of three young women who'd taken the abortion drug mifepristone, better known as RU-486. 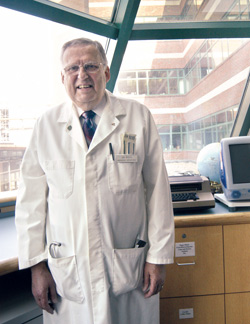 "No one was more surprised than I was," Meich says.

Immediately after the article appeared on the journal's Web site, the GOP and right-to-life groups began distributing it under such headlines as "Leading Researcher Proves RU-486 Causes Septic Shock Deaths." Reporters started calling. "No one was more surprised than I was," Miech says.

His story illustrates how politicized the uses of science have become. After teaching Brown medical students and undergraduates for thirty-seven years, Miech retired in 2000. "To keep Alzheimer's at bay," he says, he became an avid Internet researcher. In the fall of 2003, his curiosity was piqued by the case of eighteen-year-old Holly Patterson, who had died of septic shock after a failed medical abortion. Having worked in emergency rooms throughout his career, Miech was accustomed to seeing septic shock in elderly patients, usually from urinary-tract infections. He knew it is rare in young and healthy patients.

On the Web he found U.S. and Canadian reports of five young women who'd died of septic shock after taking RU-486. In three cases the lethal infection was caused by Clostridium sordellii - a common anaerobic bacterium.

"I used to lecture on RU-486," Miech says, "and I wondered if it made some contribution." He knew that the first use of mifepristone had been to suppress cortisol in the treatment of Cushing's syndrome. When the drug was also found to induce abortion, researchers shifted their focus, and the United States and some European countries approved it as part of a two-step medical abortion regimen. More than 460,000 women have taken it.

In three of the sepsis cases, Miech suspects that mifepristone enabled C. sordellii to enter the uterus while suppressing the patients' innate immune system. The patients did not show the usual signs of infection - abdominal tenderness or fever - he warns; they felt weak, and then their blood pressure suddenly dropped.

Unlike many of the people publicizing his research, Miech is not calling for a ban on RU-486. Instead, he recommends that the Food and Drug Administration reexamine its warnings and that patients taking it be more closely monitored.

"Women are told to go to the emergency room if they have any symptoms after taking mifepristone," he says. It would be better, he argues, if doctors closely monitored their patients for at least the first fourteen days of its use.

Reader Responses to How One Man's Research Turned Political