What is it about summer jobs? 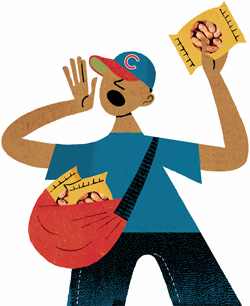 Even people unable to remember what they ate for lunch a day ago often have vivid memories of where they worked during summer vacations. There may be nothing innately compelling about waitressing in a diner or sweating in a furniture factory, but when these things happen to you at a certain age, they seem to have a disproportionate impact on who you'll become. After all that schooling, and all those hours sitting in classrooms and libraries, summer jobs can be a liberating immersion into a surprising new world. Their sweetness, not yet spoiled by anxiety over promotions and status, suggests a future of unlimited freedom and possibility.

Which is why for the second year in a row the BAM asked students to report back from the summer front. In an e-mail, we asked them to describe their summer jobs and the experience of working at them. About fifty students responded, most of them undergraduates. Many, like Rachel Ostrand '09, who worked at a Coldwater Creek clothing store in a mall, found life lessons in a job that someone else might find dull or boring.

"I had to balance politeness (of course), honest opinions, and sincerity," she wrote, "as well as try to ensure that every woman who walked in the store walked out only after having made a purchase. One thing that amazed me was that after spending just a few minutes together, people really open up and tell you a lot about themselves."

By contrast, Anna Burkhart '06 worked at a kennel in Mansfield, Massachusetts, where she fed dogs, cleaned their runs, and supervised their playing together. "This job," she wrote, "provides me with a needed break from the intellectual demands of my Brown education, as well as allowing me to spend nine hours a day with my favorite species (which is not Homo sapiens)."

Other students got their first lesson in how to enjoy a job despite an impossible boss: Gerardo Tejada '09 worked in the "baby-gear department" of a Babies R Us store. "If you ignore the management," he wrote, "the job was great. Looking at the store manager, one would wonder who on earth bothered to spawn this woman. The only time she smiled was during her regularly scheduled ridiculing of some employee - and this lady worked in a baby store!"

Similarly, Alex Eichler '08 worked as a secretary at a small consulting firm in New Jersey. He spent part of the summer amassing a huge database of attorneys in the region. "Fortunately," he wrote, "the only other two people in the office, the chairman and president of the firm, were husband and wife, so they were usually too busy bickering with each other to ask me how that was coming along."

Most students reported more uplifting employment. Josh Lerner '07 was a music teacher at Camp Star, a day camp for children and adolescents with developmental disabilities. Lerner taught his campers about the Beatles, Nigeria's King Sunny Ade, and Brazil's Antonio Carlos Jobim. He traced the history of hip-hop, and prepared groups of campers to perform in the annual musical revue. "Each day is full of excitement," he wrote, "and each night I come home exhausted but ecstatic."

Daniel Lawlor '08 taught at a summer camp at Providence's San Miguel Middle School, in a program aimed at low-income boys struggling from neighborhoods with gang violence, drug addiction, and poverty. "Judging by the reactions of the kids," he wrote, "while they may not have always wanted to learn algebra at 9:30 in the morning, they were always willing to talk, listen, and share a part of themselves."

Kayleigh Scalzo '08 applied for jobs everywhere she could think of, but the only invitation she received was from The Place, a Christian neighborhood center. "If I had known what responsibilities were in store for me," she wrote, "I probably would've hid in a corner, whimpering. Instead I became a 'crew leader' in a youth entrepreneurship program for at-risk teens. I was the teacher, leader, mentor, and supervisor for seven girls, ages 14 to 17, from troubled backgrounds. I was supposed to be their role model but I'm sure that in the end they taught me much more than I could've ever imparted to them."

Several students reported working at jobs consistent with their academic concentrations: doing research for their advisers (or in one case for the writer Dinesh D'Souza), teaching at Brown Summer School, working at a Freedom School in the Mississippi Delta, or helping out at a financial start-up firm.

Others labored on behalf of political causes or for such elected representatives as U.S. Senators Charles Schumer of New York or Jon Corzine of New Jersey.

And then there were the unusual jobs. Daniel Lennard '09 was a vendor at Chicago's Wrigley Field. Dan Greenberg '07 worked on a shrimp farm in Saudi Arabia. Zachary T. Whitener '09 went lobstering. A resident of a small island off Portland, Maine, Whitener wrote that "I have been self-employed lobstering since I was ten. I started with a seven-foot punt and five traps, but my business has steadily grown, and I now have a twenty-three-foot fiberglass skiff. This is not a family business. I am the first in my family to lobster. I am proud of my quintessentially Maine occupation."

Reader Responses to The Working Life