Despite a list of personal achievements that most Ivy football players would look at with envy, running back Nick Hartigan ’06 believes that without an Ivy title, “I am never going to be as good as I can be.” 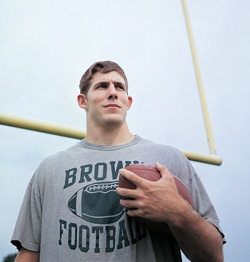 In a sports world that often seems dominated by athletes ever ready to point out how good they are, Hartigan is a refreshing change. If he were so inclined, he has earned plenty of bragging rights. He has put together what might be the best two consecutive seasons of any Brown running back. Yet the number on his mind this season is not 501, the number of rushing yards he needs to become the school’s career leader, but seven, the number of teams standing between the Bears and an Ivy title.

“I did not come here to win awards,” Hartigan says. “I came here to win football games. There is no question that the view of my career will be entirely based on whether we win the Ivy title.”

His teammates elected Hartigan a captain for the upcoming season by one of the largest margins in recent years. “He’s a quiet guy,” says Head Coach Phil Estes, “but when he’s out on the field he’s always going 100 miles an hour. He’s a leader by example, he has a great sense of humor, and he’s well liked.”

As a sophomore, Hartigan decimated the Brown single-season rushing record. The following year he set school marks for touchdowns and points in a single season. His dominance has helped prompt a move away from a pass-happy offense to a hard-nosed ground game. Opposing coaches often design their defensive game plan around stopping him.

And then there’s Hartigan’s drive in the classroom. A concentrator in political science and history, he has compiled a 3.91 grade point average, an accomplishment that resulted in being named a First Team CoSIDA Academic All-American, the first Brown football player to have that honor since 1987.

And Hartigan has already been receiving awards for this athletic season. He and linebacker Zak DeOssie ’07 were named Pre-Season All-Americans, and Hartigan is a likely candidate for the Walter Payton Award, given annually to the best player in Division I-AA football.

Hartigan is also one of the most superstitious players ever to put on a Brown uniform. As a reporter once put it, Hartigan “practices more rituals than the pope at Midnight Mass.” Mickey Cooper ’06, one of Hartigan’s best friends on the team, has been involved in more than a few of them.

“He used to eat two bananas at breakfast,” Cooper says. “One morning I stole one and he had his best career game. Now every breakfast I have to take one banana.”

And then there’s the shirt. Now more of a tattered piece of fabric than a garment, the T-shirt he wears under his pads is a relic from his high school days. He has worn it for every game and practice since the start of his sophomore season. “It’s pretty ratty and pretty disgusting,” Cooper says. Hartigan, however, is determined to stick with his good luck charm until the bitter end. “Even if it’s just a neckline I’ll be wearing it,” he says.

Returning to play with Hartigan this season are nine All-Ivy players and eighteen of 2004’s twenty-four starters. Despite ending with the Bears’ first winning record in three years (6–4, 3–4 Ivy), last season was full of near misses: the team lost two games by a combined five points. Estes believes the team should hold up better in the clutch this year.“Obviously there is a lot of optimism coming into the season,” he says. “With much more experience, the expectations are very high.”

This season should also mark a resurging passing game for the Bears, who might have the best receiving corps in the Ancient Eight. Anchored by Jarrett Schreck ’06, who emerged last season as an elite Ivy receiver, the Bears also will feature former All-Ivy player Lonnie Hill ’07, who is back after missing last season due to academic reasons.

The biggest question on offense is who is going to be passing the ball. During the preseason, Estes refused to name a starting quarterback in the competitive battle between Joe DiGiacomo ’07 and Anthony Vita ’07.

“We have opportunities to do a lot more things this year,” Estes says. “We can get into a lot of one- or no-back sets, but what it still really comes down to [for opponents] is stopping Hartigan.”

Defenses’ success in doing that will ultimately depend on an offensive line that returns only one starter, Second Team All-Ivy selection Alex Jury ’06. Hartigan, however, is not concerned.

“The linemen we have had the past two years, I love those guys to death,” he says. “But we are now more athletic up front, younger and healthier. I’m very confident in what they can do.”

One of the biggest gains last season was the addition of Steve Morgan ’08, who finally provided a reliable presence in the kicking and punting games. His impact was so noticeable that he was named Ivy League Rookie of the Year.

On defense, the Bears hope to at least duplicate last season, which they finished ranked second in the league. To do that, they will continue to rely on DeOssie, a superstar in the making whose playmaking abilities conjure up memories of his father, Steve, a former NFL linebacker.

“Zak has great instincts and great athletic ability,” Estes says. “He can make plays on both sides of the line.”

The other defender to keep an eye on is James Frazier ’06, a powerful defensive end from whom Estes expects big things this year. “James Frazier could be dominant in the Ivy next year,” Estes says. “He is a great pass rusher, as strong as you’ll see. He is also fast and athletic.”

Surrounded by what appears to be a a strong defense and a potent offense, Hartigan is looking forward to this year. A preseason poll picked Penn and Harvard to vie for the top spot, with Brown right behind them. “We’re a really talented team,” Hartigan says. “I’m really excited about this season.”

Reader Responses to What Record?