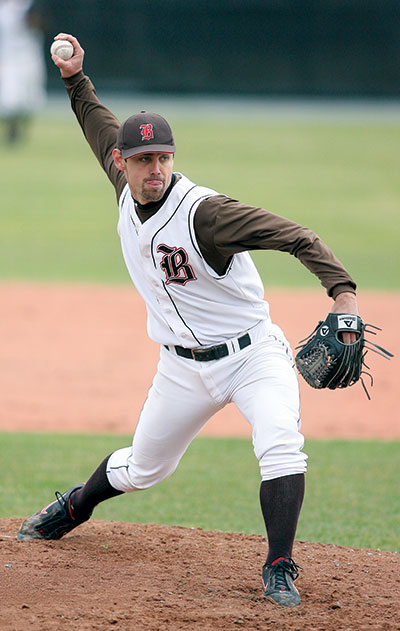 Jeff Dietz ’08 pitched seven shutout innings against Yale in late April to help the Bears grab first place in the Ivy League.
The baseball team won its first-ever Ivy championship in early May after it beat Lou Gehrig Division winner Penn. First-place finish means that Brown will be the Ivy representative in the NCAA championship tournament. One of the season’s stars was tricaptain and catcher Devin Thomas ’07, who looked to be a contender for Ivy League Player of the Year. In the final doubleheader of the season—Brown swept Central Connecticut State, 14–11 and 14–7—Thomas hit three home runs and drove in nine to go six-for-seven. With sixty-one RBI on the year, he shattered Brown’s single-season record, which had stood at forty-eight since 1999. His fifteen home runs broke the school’s season record in that category, which had been set almost thirty years ago.

No one was more determined, however, than Thomas’s battery mate, Jeff Dietz ’08, who pitched a complete-game, 1–0 shutout in the first half of a two-game playoff sweep of Penn on May 5. Dietz, who had predicted earlier in the week that he would pitch a complete game, struck out ten batters and allowed only three hits. He ended the season with a 7–3 record and a 3.12 ERA. Although Dietz led the league in innings pitched (seventy-two), he was also a force to be reckoned with in the batter’s box: his .352 average placed him among the league’s top-ten hitters, along with Thomas (.382), outfielder Ryan Murphy ’08 (.382), infielder Matt Nuzzo ’09 (.370).

“It’s taken a long time for me,” Coach Marek Drabinski said after the team won the championship, “and I feel like a burden’s been lifted off my shoulders. It’s unbelievable.”