Few tasks lurk more ominously and inevitably than cleaning out one’s parents’ house after they are gone— but my mother recently decided to save me some of the trouble. A friend of hers had moved to a small apartment from a house lived in for decades, disgorging truckloads of long-forgotten possessions in the process. My mother had been shoving things into her own attic for forty-six years. Lightening up looked good. 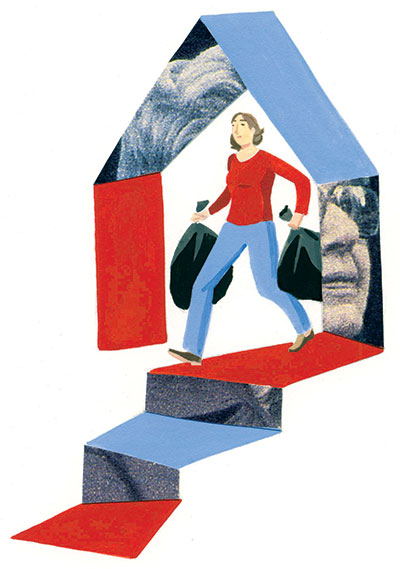 She had only to mention this to me and I sped to our ancestral home in suburban New Jersey to help.

Though some might have spent the day sifting dreamily through scrapbooks and wardrobes, my mother and I took a more utilitarian approach. She helped me with the schlepping until a trash bag we were carrying to the curb burst and the magazines that popped out smacked her in the face and skinned her nose. After that, she just let me do it myself, and I went ruthlessly on, carrying everything to the curb or to the giveaway pile, including a few potentially sentimental items like my father’s old Super Bowl party decorations and an art portfolio that belonged to my late brother-in-law. No one has looked at any of this stuff in decades, I told myself. Or as a friend who just moved her grandmother out of a Florida condo put it, “You live, you die, your stuff goes out to the curb.”

As I knew would happen all along, when I was finally finished, my mother surveyed the heap and called for something to be brought back in. And naturally, it was the heaviest thing of all—some sort of wooden cabinet with built-in drawers that she didn’t really recognize but felt was “too nice” to throw away. She asserted that one of “the boys” (her grandsons) would want it some day.

Well, it might have been some kind of wall-mounted bar in one of the apartments Daddy and I lived in before you were born, she speculated.

Personally, I thought it probably was picked up off the street by that same dear departed brother-in-law, who was quite a trash-picker in his day.

I’m gonna end up carrying that damn thing out of here again, I said, after I dragged it back upstairs to its dusty corner. Or better yet, I told her, after the funeral, I’ll walk up to each grandson in turn, placing my hand on his suited shoulder. “Noah,” I’ll say, “Nana left something very special just for you. She wanted you to have it. Come upstairs, let me show it to you.”

Wicked laughter ensued. Black humor is what Nana is leaving just for me.

As it happened, this attic-cleaning adventure followed just weeks after I visited New Orleans, where so many have chosen not to return to their gutted abodes. What is it, after all, that makes a place home? Perhaps some of us are “place” people, whose home is a physical location, and some are “things” people, whose home is created by the objects inside it. If “things” people have their objects with them, they can feel at home anywhere, and conversely, if they lose their objects, they never will feel at home again.

I must be a place person, because if a hurricane hits our house, I’ve decided to take my laptop, the birth certificates, and a few photo albums. Forget the rest. Thinking back, when I felt incredibly homesick after spending months in Europe, I found I missed the U.S. highway system more than anything else. I just wanted to see an American road. Of course, I was only twenty then, and didn’t even have a place to live. All my stuff was in post-college storage in my mother’s attic. Where it remained for thirty years, until that afternoon a few weeks ago, when it all went into the giveaway pile or out to the curb.

Marion Winik is a commentator on National Public Radio’s All Things Considered and the author of five books of creative nonfiction. She lives in Glen Rock, Pennsylvania.

Reader Responses to The Giveaway Pile