Good cop Todd Oldham butters ’em up, pats ’em on the back, and gives contestants a big hug at the end of every episode of Bravo’s reality-based series Top Design. Then a panel of bad cops—Margaret Russell, Elle Décor’s Jackie O–channeling editor-in-chief, and designers Jonathan Adler and Kelly Wearstler—lowers the boom on wannabe interior designers who fail the show’s weekly challenges. 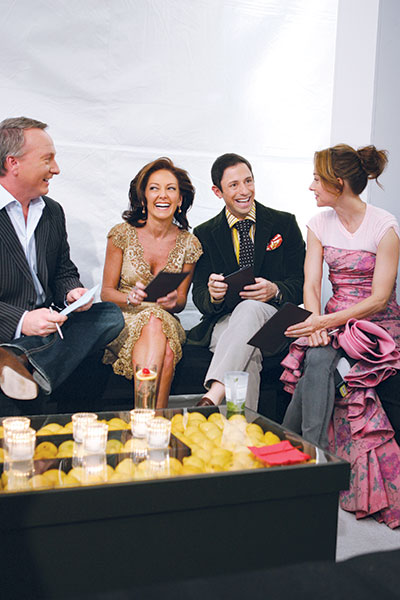 Somebody’s got to do it. Only one of the twelve contestants gathered at Los Angeles’s Pacific Design Center would win the prize of $100,000 in cash, a new car, and a spread in Elle Décor.

And Top Design benefits from a ticking-clock, three-act structure. Each episode starts out optimistically when clothing designer Oldham, busting with boyish-bordering-on-saccharine enthusiasm, explains the project: revamp a family’s junk-infested garage; build a beach cabana; craft a chef’s table; or create an upscale hotel suite around the theme of earth, air, fire, and water. With just two or three days to complete the project, the designers sketch their concepts, buy supplies, and get building.

Act Two devolves with hissy fits, surly carpenters, crippling self-doubt, and paint colors that look tragically different on the wall than in the hardware store. The action unfolds in frantic marathons as exhausted designers rise to the challenge or crumble under the pressure.

Act Three hews to reality-TV’s now ritualistic firing-squad denouement. Designers line up to face the music. The judges don’t mince words. One early Top Design victim is told, “Your room looks like a crime scene.” Adler firmly tells crybaby Goil to quit whining about being ignored by his teammates: getting your ideas heard is half the job, Adler advises. He should know; he’s taken a business that started with hand-cast pots and expanded it into a line of stores that carry his own textiles, lamps, and furniture. [“Fashion for the Fun at Heart,” Arts & Culture, November/December 2005].

Adler consistently steers contestants away from “sad” and “gloomy” looks while Russell serves as the panel’s resident arbiter of sophisticated chic. She cofounded Elle Décor, and seven years ago took the top spot on the masthead. Under her leadership, the magazine has taken on Metropolitan Home and Architectural Digest to become one of nation’s top luxury-class shelter magazines.

Between her magazine work and putting together her book Designing Women: Interiors by Leading Style Makers, Russell has hobnobbed with her share of demanding designers. So when she concludes that contestant Carisa’s eye-popping mid-century modern-meets-pop-art room in the show’s semifinal episode is “not upscale enough,” the Manhattan-based editor knows whereof she speaks.

Personality conflicts juice the drama but Top Design transcends such mean-spirited soap operas as The Apprentice and Beauty and the Geek by showcasing some genuinely talented artisans in action. Hyper-competitive Carisa, modernist Andrea, and the relatively laid-back Matt command respect as they hammer out handsome work on unforgiving deadlines. And while the judges may seem pitiless, their common-sense feedback serves as a weekly primer in the high art and practical science of interior design.