China comes in peace. This was the message repeated many times by the country’s ambassador, Zhou Wenzhong, during his late-March visit to Brown. 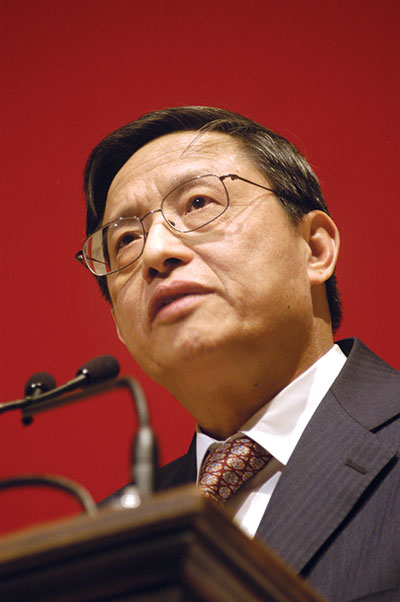 “China’s development is not a threat to anybody, but an opportunity for the entire world,” he told an audience gathered at the Salomon Center for Teaching. “China will always advocate for peace.”

He also said: “China will never seek hegemony.” “China does not interfere with other countries’ internal affairs.” And China has as its “ultimate goal to build a harmonious world.”

The ambassador’s remarks came amid a growing perception in the United States that China poses a serious challenge, if not an actual threat, to U.S. interests throughout the world. China this year, for example, announced a 17.8 percent increase in its defense budget, the nineteenth consecutive year of double-digit growth. It has sought to temper U.S. efforts to impose sanctions on Iran for pursuing the development of nuclear weapons. It has also bucked pressure from Washington to end subsidies to its paper industry, prompting the Bush administration in March to slap steep tariffs on some Chinese imports.

Students demonstrating outside Salomon criticized China’s ties to the Sudanese government, which human-rights groups hold responsible for the genocide being committed in Darfur. Sudan’s economy has an expected growth rate of 13 percent, due in large part to Chinese investments. When asked during the question- and-answer session about China’s relations with Sudan, Wenzhong said a recent discussion with U.S. officials had led him to conclude that “genocide was something happening there two years ago, three years ago, and the situation on the ground is actually improving.” 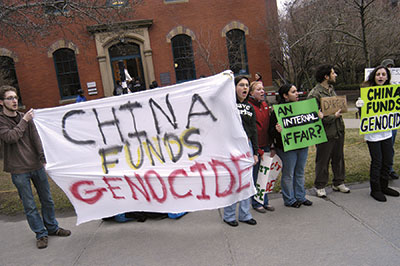 Students protest outside the talk

Again stressing China’s peaceableness, he added that “China will continue to do what it can to urge ... all parties to implement the peace accords” that the parties have been trying to hammer out since 2004.

Wenzhong’s most controversial remarks came when he was asked about Taiwan, which China considers part of its territory rather than an independent country. The Pentagon recently announced it had approved the possible sale of up to $421 million in missiles to Taiwan for use on its F-16 fighter jets. “Stop selling weapons to Taiwan and stop sending any wrong signals to Taiwan’s independence forces,” Wenzhong said. “The civil-war status between Beijing and Taiwan is not yet over.”