Meredith Ostrander plays in the top women’s hockey league in the world for the best team in that league. Her teammates and competitors include many Olympic players. Her season runs from September until April, every bit as long and grueling as the all-men’s National Hockey League. 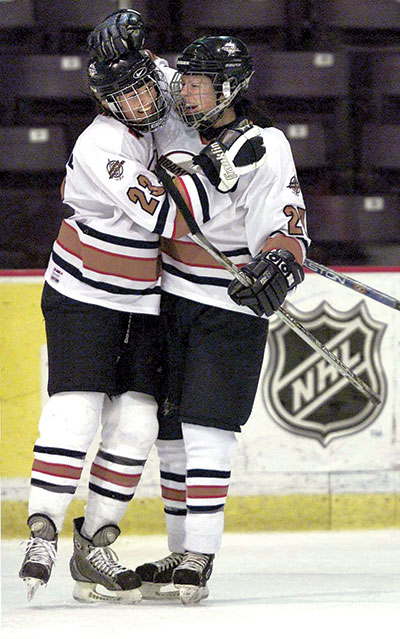 Still, for all her efforts on the ice Ostrander earns an annual sum of exactly $0. To support herself she works full-time in the logistics and compliance department of a chemical distribution company in Toronto, leaving three or four times a week to practice or play hockey from 6 to 11 p.m. If Ostrander were a man, after graduation she’d likely have moved to Europe, where hockey players can earn more than $100,000 a year. Instead, the 28-year-old Canadian says, “I even have to pay for my own equipment.”

This is how it goes in the seven-year-old National Women’s Hockey League, which is drawing some of the best women’s hockey players in the world. The NWHL has thirteen teams—twelve in Canada and one in Minnesota—but it hasn’t been able to land a broadcast deal or major corporate funding. Ostrander’s team, the Brampton Thunder, plays in a 6,000-seat stadium just outside Toronto. A typical regular-season game draws a crowd of 100.

It helps some, Ostrander says, that the attendees are mainly young girls who play hockey and come running up after the game to ask for her autograph. Still, she says, “it’s very disheartening.”

So why do it? It’s about the camaraderie and companionship, she says. Two of Ostrander’s former Brown teammates —Kristy Zamora ’02 and Kathleen Kauth ’01—are now on the Thunder. Ostrander worked defense and was known for having the team’s hardest slap shot, yet surprisingly soft and sensitive hands. Zamora, the Bear’s co-captain in her senior year, ended her Brown career with a total of 72 goals and 48 assists for 120 points, ranking her eleventh on Brown’s all-time leading scorer list. Meanwhile, Kauth, who graduated a year ahead of Ostrander and hails from Saratoga Springs, New York, racked up 108 points in her four years at Brown. She also played on the 2006 U.S. Olympic team, earning a bronze medal. “We’ve all been playing together for close to nine years now,” says Ostrander. “At this point, we pretty much know each other inside and out.”

This year the Thunder finished third in the NWHL’s Central division. All the teams in the league go to the playoffs, and it was in this final round of games that, as the team’s Web site puts it, the competition wound up “Thunder struck.” In April the Thunder won a best-of-three series against the Mississauga Aeros to clinch the division championship largely by employing a “rope-a-dope” strategy in which they exhausted the Aeros early in the games and then came back stronger than ever in the third period.

Then it was onto a resounding 4-0 victory over the Montreal Axion with Zamora scoring the game winner. All the same, there was hardly any press coverage, and Ostrander had to go right back to work the next day. “I plan to keep on doing this until my body gives out or I stop having fun,” she says. “It helps to keep me out of trouble.”

Reader Responses to Pucked Off