Law students who received financial help from their parents had more disposable income throughout their lives than classmates who had to go it alone. Robert Sauer, a visiting professor of economics, came to this conclusion when he studied 658 alumni of the University of Michigan law school and discovered that every dollar a parent contributed increased a child's lifetime disposable income by $1.76. The main reason, Sauer believes, is that such students graduate with lower debt burdens. On the other hand, parental contributions seemed to have little effect on a child's job choices and lifetime earnings. The study, he says, suggests that while such contributions help individual students, they may not have enough societal benefits to justify such things as tuition tax credits. "The parental contributions just subsidize their [children's] lifestyle," he explains. "You just see a better car." 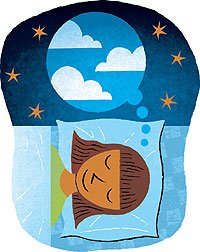 Want to help an eight-year-old handle stress? Make sure she gets to bed by nine. That's the conclusion Vincent Capaldi '02 reached after poring over data collected as part of a Columbia University study, a conclusion he presented along with Assistant Pro-fessor of Psychiatry and Human Behavior Laura Stroud and Professor of Psychiatry and Human Behavior Raymond Niaura at the March meeting of the American Psychosomatic Society. Capaldi looked at the results of the Columbia study, which measured levels of a stress hormone in eight- and nine-year-old girls while they performed three stress-inducing tasks, and found that girls with later bedtimes showed a response similar to that of smokers and patients with post-traumatic stress disorder. "If you think about it," Capaldi says, "what I found is pretty basic. This really puts scientific data behind a well-known principle."

Sound-effect technicians, or Foley artists, have long claimed that in the movies, exaggerating the sound of a real event makes it seem more believable. Laurie Heller, an assistant professor of psychology, wanted to find out why, so with the help of Lauren Wolf '02 she recorded the sounds of nine real events and their Foley counterparts, then tested the sounds on listeners. Next they created a digital hybrid, combining, in one case, the tempo of a real person walking in mud with the Foley artist's exaggerated counterpart: the sound of a wet newspaper squishing. Listeners, Heller found, liked the hybrid sound best. The study, she says, provides a clue to understanding which aspects of sound people extract and remember and which they forget.