By Zachary Block '99 / July / August 2002
June 29th, 2007
You wouldn't normally think of jackhammer and chainsaw operators as an untapped market for entrepreneurs. But then again you're not the nine business and engineering students who founded a company called Ferrosity just for such workers. Their vision was both imaginative and sound enough to take the top prize in this year's Brown entrepreneurship competition, which awards $25,000 in cash and services to the student business plan most likely to succeed. 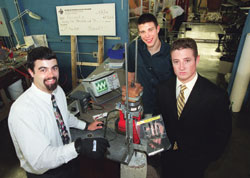 Ferrosity focuses on the millions of stonecutters and construction, forestry, and shipyard workers who spend their working hours every day driving a jackhammer into concrete or felling trees with a chainsaw, all of which can wreak havoc with their hands. About 3.5 million such workers in the United States and European Union alone risk developing Hand Arm Vibration Syndrome (HAVS), a deadening of the nerves and blood vessels in the hands and arms.

To aid them the students behind Ferrosity created Countershock gloves, which put a new use to existing materials to dampen power-tool vibrations. Although the gloves are not cheap - $110 a pair - the students argue they will more than pay for themselves by reducing missed workdays and worker's-compensation suits. "Not only do we have something that's new and innovative," says Ferrosity president Brian Norgard '03, "it helps people."

The students developed the gloves while trying to find a new use for magnetorheological (MR) fluid, a liquid that solidifies in the presence of a magnetic field. The team would brainstorm around a long table in a narrow campus office, the engineers among them throwing out ideas, while the business students evaluated the ideas' cost and market. Eventually they learned about HAVS and came up with the idea of gloves whose fluid liners would solidify when coming into contact with a magnet attached to the handle of a power tool.

Among Ferrosity's entrepreneurial competitors this year were the Polaris Project, a nonprofit group that fights international sex trafficking, and FDLT Productions, a theater, video, and music production company.

Although winning the competition will help Ferrosity patent its Countershock gloves, the company needs funding for more research and development. They'll also need to raise up to $300,000 for manufacturing and distribution, an amount too small to interest most venture-capital firms.

Which is fine with Norgard. "We're trying to move away from the Internet-bubble model," where money is raised before a product is in place, he says. Not that they'd turn down an eager investor.

Reader Responses to Hand in Glove