I Will Not Fear

School-day mornings, the students from a primary school in my neighborhood walk by my street, their blue-and-white uniforms a crisp contrast to the gray morning light. They remind me of my own childhood, when I, too, dressed in white and blue. Each Monday morning before classes, my schoolmates and I would line up in our main courtyard to pledge our allegiance and sing our national songs. The lyrics to one particular unofficial anthem always brought me up short: "Vietnam, Vietnam, the first words I hear when I come into the world. / Vietnam, Vietnam, the last words I utter before I take my last breath." 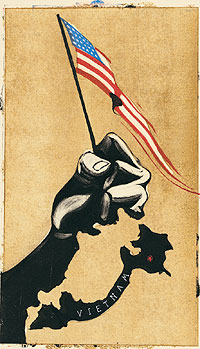 As a child growing up during a full-blown civil war between a republic South and a communist North, I embraced all of my country's patriotic ballads and history lessons. They boasted pride, allegiance, and love for the Viet people, descendants of mythical dragon kings and fearless empresses who fought their northern Chinese neighbor for self-rule. Our heroes were the courageous and resilient patriots who defeated the French colonialists and regained independence for the Vietnamese.

I learned early on to accept death as a part of life; the television showed daily, sometimes hourly, casualties from the fighting. Like so many other families, mine lost a son in battle: my oldest brother, Hung, died in the summer of 1972 at Quang Tri. When Saigon fell to the communists in April 1975, my family left Vietnam and came to the United States as political refugees. I was ten years old. Since then America has been my home.

OUR NEW NEIGBHBORS IN IOWA welcomed us into their small farming community, helping my parents and older siblings find jobs and enroll us younger children in school. It was the modern equivalent of a barn raising, and we doubted that in Vietnam our own people would have been so welcoming, so accepting, and so generous toward strangers from a different land and belonging to a different race.

Other things surprised us as well. A Norwegian American member of our new church, disgusted by draft protesters and flag burners, nevertheless adamantly defended their right to political expression. This was eye-opening for us, coming as we did from a country where dissent could land you in jail, where someone who disagrees with you becomes your adversary, or worse, your enemy.

Whether in school or at work, we found Americans striving to practice fair play - enforced fairness - a concept that took a backseat in the old Vietnam, a country built upon Confucian social, political, and economic hierarchies. In Iowa it didn't matter if you were the football hero or a nerd, if you were a farmer or the mayor; you still had to wait your turn at the movies or the grocery store. When someone in our U.S. community died, all of the children inherited - not just the eldest son, as is the Vietnamese custom.

Americans defended a fundamental right to life that went far beyond anything we had known. They fervently monitored and protected those rights, even for the terminally ill and for animals. They protested the execution of convicted criminals. In the old country, Buddhist teachings taught us that dying was a release from our desires. Underdevelopment and war kept us focused on survival.

We found our new neighbors open and curious, eager to learn about our customs and traditions. One family friend, Miss Henrietta Van Maanen, took it upon herself to solve our problems and those of her other friends. A sixty-year-old former school administrator, she read voraciously - when she was not traveling to China or Europe. Like many Americans, Miss Henrietta believed that all problems were surmountable: one need only apply oneself. Her optimism and energy seemed unbounded. While Americans looked toward the future for ideas and solutions, my people tapped the past for lessons learned.

After years of avoiding guerrilla warfare, some of my relatives were afraid even to go for a hike in our state park. But our American friends, never having lived through curfews or military checkpoints, faced the unknown in the spirit of adventure. I envied them this carefree, unfettered quality.

SEPTEMBER 11, of course, shattered this illusion of invulnerability. For me, it brought back memories of the 1968 Tet Offensive, in which guerrillas from North Vietnam surprised the south with an attack on Saigon. I found myself reaching back to that past for guidance, and this is what I remembered: Life went on. The rainy seasons arrived and departed. We children went off to school. We enjoyed our summer vacations. We celebrated our holidays and memorial days. We did not stay at home and close the door because our country was engaged in a civil war and we were bomb targets. Life was too precious to be wasted on fear.

Similarly, against the backdrop of Ground Zero, the minutiae of daily life become even more prosaic and at the same time more precious. The word courage has been associated with the fallen airline passengers and workers, the firefighters, rescuers, and Good Samaritans. I believe courage is a requisite for all of us.

For me, as an American citizen, patriotism means many things: a love of the United States despite our frailties, a love of freedom and liberties, of our openness, our multicultural heritage, our big- heartedness, and our courage. I have lost one country already. I am not going to lose this one, and certainly not to fear.

Reader Responses to I Will Not Fear