By Zachary Block '99 / July / August 2002
June 29th, 2007
Eight consultants. Twenty-two days of meetings. Three sparsely attended forums. The result is a far-reaching forty-four-page report with one clear message: it's time to arm Brown police. The report, authored by a team of security experts led by former New York City police commissioner Bill Bratton, was commissioned by the University earlier this year in response to a marked rise in robberies and assaults taking place in the streets surrounding campus ("Crime Fight," Elms, March/April). While Brown administrators will ultimately decide whether or not campus cops will carry guns - and the report presents two alternatives - the consulting firm leaves little doubt over its preference. 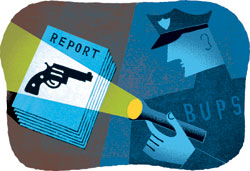 "The Bratton Group sees many problems in maintaining an unarmed police force," the consultants write. "They look like police, they wear police uniforms, they drive up in police cars, but in one important respect they are not police, at least as far as many criminals and disorderly individuals are concerned." Guns are necessary, the consultants continue, to allow Brown police to do their job properly and to "equip them for the broader role of policing College Hill and not just Brown property." (The Bratton Group also reviewed a variety of non-lethal weapons, including Tasers, sticky-foam glue guns, and ensnaring nets, but rejected them as ineffective.)

President Ruth Simmons remains noncommittal on the arming issue, and has deferred any decision until the fall, when students and faculty will have their first chance to respond to the report. While that discussion is likely to focus on the arming question, the Bratton Group's suggested reforms range more widely. A few of their recommendations are relatively simple and arguably cosmetic - changing the Brown University Police and Security Department's name to the Brown University Department of Public Safety, for example - while others address such internal issues as how the department is organized, how officers are trained, and how crime data are collected and analyzed.

While all these recommendations can be unilaterally implemented by Brown officials, a few important suggestions depend on coordination with institutions over which the University has relatively little control. The Bratton Group writes, "The responsibility and control for the investigation of most street crimes, and all violent crimes, lies solely with the Providence Police." As such, any effort to em-power Brown police will require highly institutionalized cooperation with their city counterparts. The report, for example, calls for biweekly meetings among Brown, the Providence police, and RISD's unarmed security force as well as for connecting Brown police to Providence police databases. The report suggests Brown ask the city to post foot patrols on Thayer Street and assign a detective to work exclusively on crime reported on College Hill.

The consultants also urge the University to overhaul the way campus police deal with sexual-assault victims, including designating a coordinator to centralize such investigations. And they recommend that the University expand shuttle and escort services and discontinue regular police patrols inside residence halls.

With University administrators eager to show their concern for campus safety, a reorganized campus police department will likely greet students in September. Then will come the tough questions, like the one posed by a Brown police officer in the Bratton report. "The University has to make up its mind what kinds of service they want," the officer says. "Are we security guards or police?"

Reader Responses to Searching for Answers