The Agony of Defeat

This spring the baseball team won a school-record twenty-five games, surpassing the previous high of twenty-three achieved in each of the three previous seasons. But for coach Marek Drabinski and his players, the real achievement - and the one that remains elusive - would be winning Brown's first-ever Ivy League title. "A lot of people say, 'You set a school record,' " Drabinski says. "Well, that's all great, but we set out this year to win the title. That's the only thing left for us." 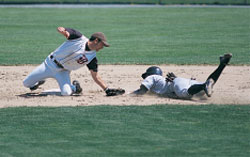 Shortstop John Magaletti '04 tags out a Yale runner in the first game of a double header held at home on May 3.

Drabinski has been talking title for four years, but coming up empty was especially painful this season. The Bears and Harvard finished the Ivy League regular season tied with 13Ð7 records atop the Red Rolfe Division. The deadlock set up a one-game playoff at Harvard for the division title, with the winner advancing to the Ivy League championship series against Princeton, the Lou Gehrig Division champion. The winner of that series would then advance to the NCAA tournament.

Harvard had won the right to host the one-game playoff because the Crimson had swept Princeton in games earlier in the year, while the Bears had split with the Tigers. Of course, none of that mattered on the day of the playoff, May 8, especially after Brown, on the strength of a second-inning solo home run by third baseman Jeff Nichols '05, took a 1Ð0 lead into the bottom of the ninth. On the mound, Jonathan Stern '02 was locked in a splendid pitchers' duel with Harvard's Ben Crockett. Stern had allowed only four hits, and was now three outs away from a win.

But the Crimson's Schuyler Mann led off the inning by reaching first on an infield error. Stern rebounded to fan the next two batters for his season-high thirteenth and fourteenth strikeouts. Although Harvard pinch runner Nick Seminara stole second to put the tying run in scoring position, the Bears were now only an out away from a division title. Stern then waged a terrific, nine-pitch battle with pinch hitter Micky Kropf, who fouled off four pitches in working the count to three balls and two strikes. Then came the tenth pitch. According to Drabinski the pitch was supposed to be a changeup low and away. But the ball, as Drabinski grimly recalls, "stayed in the middle-half [of the plate] and the kid crushed it."

By the time the dust cleared, Seminara had scored, and Kropf was standing on third with a triple. With the score tied 1Ð1, Drabinski visited the mound to settle down Stern. Unfortunately, though, Stern's next pitch was his last one for Brown. It was a good curveball, low and away, but Harvard's left-swinging second baseman, Faiz Shakir, cued the ball off the end of his bat, dunking it into left field, beyond the frantic reach of shortstop John Magaletti '04 and left fielder Matt Kutler '04. Brown's title dreams were gone, 2Ð1.

"It was just a little blooper that tailed toward the left-field line," says Drabinski. "The kid couldn't have thrown it in a better spot. We just sat there for five minutes, stunned. We were just staring out at the field. I remember thinking afterward, ÔNow I know how the '86 Red Sox feel.' Maybe the man upstairs just wants me to suffer a little bit more, so that when we do finally get [the league title], it'll be that much sweeter."

Scott Cole is a writer in North Attleboro, Massachusetts.
What do you think?
See what other readers are saying about this article and add your voice.

Reader Responses to The Agony of Defeat