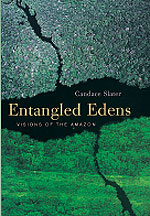 For almost fifteen years Candace Slater, a professor in the Spanish and Portu-guese languages department at UC Berkeley, has been collecting stories from some of the 23 million residents of the Amazon region of South America. In Entangled Edens she provides a rich sampling of the mythical tales she's gathered from such unlikely sources as gold miners and descendents of runaway African slaves - people who are either nonexistent or reviled in most contemporary accounts of the tropical rain forest.

Slater's book is part of a growing scholarly trend of environmental revisionism that seeks to fill out the one-dimensional picture of landscapes that dominated during the twentieth century. The Amazon, for example, is most commonly portrayed as an unspoiled, unpopulated Eden or as a kind of ecological El Dorado. The humans generally portrayed in the region - when they're portrayed at all - are either victimized native peoples or rapacious interlopers ruining the forest. In fact, Slater says, the bulk of the population has been shut out "of relevant dialogues and political processes that directly affect their lives."

Slater, who describes her book as "an Amazon-centered poetics," convincingly argues that sound environmental policy must take into account this human factor - something many environmentalists have begun to do, particularly in Asia and Africa. Otherwise, our images of places like the rain forest will "inspire but also blind."