There is a certain type of person who's always in the know, whether it's about the hip new bar with the unlisted phone number, the blemish cream that beauty editors swear by, or the delightful new novel that isn't yet a best-seller. 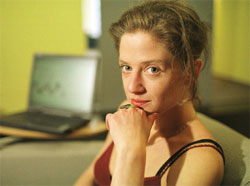 Dany Levy tells all on dailycandy.com.

Dany Levy '94 is that kind of person. Every weekday Levy's Web site and e-mail newsletter, Dailycandy.com, delivers a heads-up on something style-conscious New Yorkers need to know - a samples sale, perhaps, or where to find the first soft-shell crabs of the season. (Dailycandy.com also links to a Los Angeles version, and one for London is in the works.)

The two-year-old site and e-mail newsletter have 115,000 subscribers, Levy says, with 300 to 400 more signing up every day. The audience is an advertiser's dream: mostly affluent women between twenty-four and thirty-five who consider themselves early adopters of fashion trends. That's how Daily Candy has drawn such upscale sponsors as Bergdorf Goodman and Saks Fifth Avenue.

After creating a gossipy style section at New York magazine, Levy became a beauty editor at Self before working on the Cond} Nast prototype of the shopping magazine Lucky. But Levy grew frustrated that the trends she was profiling had become stale by publication time. She dreamed of spotting a great pair of shoes on the street in the morning and telling the world that afternoon.

Levy left Lucky in early 2000 to launch Daily Candy with money she'd been saving for business school. Since then the Web site has notified readers about a "sleek, elegant speakeasy" in Midtown ("Just do us a favor and keep your lips sealed") and noted the first day peonies appeared in the farmer's market. It spread the word when Bluefly.com, which sells discount designer clothing, was donating 20 percent of sales to a breast cancer charity. Twenty-four hours after Daily Candy wrote up a new book called Sam the Cat, the book had jumped to thirty-eight on the Amazon bestseller list.

One reader favorite was the write-up of a new bar on Eldridge Street. The owner didn't want any press, but Levy couldn't resist sharing the find with her readers. She posted a scrambled address (413 Legeddir Street) and a photo of a glass of milk and a jar of honey (the bar's name, revealed on the site months later, is Milk and Honey). "Consider it a scavenger hunt," she wrote. "If you can find it, you've earned it."

The site, Levy says, "is like your trusted friend letting you in on a secret." She's especially fond of quirky items such as how to remove lint the way Cond} Nast girls do - with the sticky side of a Fed Ex pouch. "It's the randomness," she says. "It could be the new must-have jeans. It could be a yarmulke for dogs."