You can tell how much flamboyant front-man Jon Spencer '87 loves the name of his New York City trio by the sheer number of times he howls "Blues Explosion!" 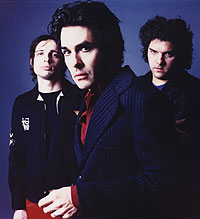 during his high-voltage live act. It's a bit of megalomania fitting for a man often compared to Elvis, James Brown, and Mick Jagger. Spencer has good reason to love his band's name. Its sound is an explosion of influences, at once derivative and unique. While reviewers fumble through the categories to describe the music - scuzz rock, punk rock, rockabilly, old-fashioned rock 'n' roll, and, yes, blues - JSBX says it all.

On Plastic Fang the group departs from the electronic experimentation of 1999's Acme in favor of a thick rock sound fueled by powerful riffs from guitar god Judah Bauer and an infectious backbeat from drummer Russell Simins. Spencer leads the way with a growling, storytelling delivery, taking listeners through a monster-movie theme on songs such as "Sweet 'n' Sour," "Down in the Beast," and the band's latest single, "She Said." Yet despite repeated references to werewolves and bloodletting, Plastic Fang is tamer than its predecessor. Producer Steve Jordan cleaned up the band's gritty sound and encouraged a more controlled approach - a step toward the mainstream that has polarized reviewers. Some critics and fans have judged it the weakest album in the band's decade-long career. Others, perhaps riding the enthusiasm for neophyte pop-punkers like the Strokes and the White Stripes, have hailed it as the band's best effort yet.

On one point, though, everyone agrees - the songs play better live than on disc. At JSBX's Boston stop-off during the group's recent tour, Spencer - a onetime semiotics student who left Brown to start the punk band Pussy Galore - took the stage at the Roxy sporting black leather pants, a shiny red shirt, and muttonchop sideburns to rival Neil Young's. Spencer lived up to his rock star looks with a performance that was almost superhuman in its relentlessness. He strutted, swaggered, thrust himself into every chord, and dipped the mike like a dance partner. During an encore of "Magical Colors," he dropped out of sight twice, writhing on his back as he screamed, "Let me hear you say, yeah!"

Plastic Fang is at its best when it recreates this live energy on tracks like "Money Rock 'n' Roll" and "Hold On." But more often than not, listening to Plastic Fang is like watching a fireworks display on TV. The pyrotechnics are still there, only tiny, muted. Plastic Fang lacks bite.

Michelle Walson is a production assistant on the PBS documentary series The Visionaries. She lives in Somerville, Massachusetts.

Reader Responses to Toothless on Vinyl