About eighty-five classmates and fifty-four guests attended our thirty-fifth reunion. For photos, activities, names of our new class officers, and a list of classmates in attendance, visit our class Web site via the alumni home page (alumni.brown.edu). 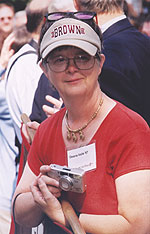 Deana Astle has her camera at the ready as the parade winds on.

Saturday's class panel discussion, "Our Aging Parents: Caring, Caregiving, and Coping," was moderated by Carol Lemlein and included Scott Hensel. Classmates with parents at critical stages of care were comforted to find so many others facing these challenges. We'll be facilitating a support network among classmates beyond the reunion. On a lighter note, Elias Safdie held court as photographer for portraits of classmates with the elusive Professor Josiah Carberry to raise money for our class treasury.

Also on Saturday, we learned from Bill Barrett that the class handily set a thirty-fifth-reunion record, raising more than $4 million for Brown. Our participation level was below our objective, which makes this a good time to remind everyone that Brown needs our support every year, not just in reunion years.

A high point of the weekend was Saturday's class dinner, where Susan Salms-Moss treated us to several operatic arias. The dinner also featured a class trivia contest, reviving memories of panty raids and meals that sent Pembrokers to the infirmary. We didn't designate an official winner, but Brian Murphy was right there with many of the answers.

Special activities continued into Sunday, beginning with the formal adoption of President Ruth Simmons by the class of '67. Paul Alexander led an informal roundtable discussion "Paths Not Taken: Where Do We Go from Here?" under a chilly tent on the Green.

An impressive number of classmates stayed to march on Monday. We enjoyed superb weather and got to don our cool reunion sunglasses. We have a few of these and other goodies for sale on our class Web site.

Thanks to all those who helped make our thirty-fifth a success. We hope to involve more of you in class events during the years leading up to our fortieth. Use the contact form on our Web site to share your ideas.