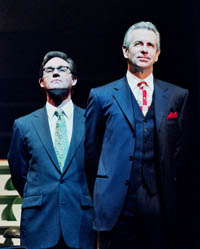 by Tony Award­–winning playwright Michael Frayn (of Copenhagen fame), opened at the Brooks Atkinson Theater. James Naughton ’67, above right (who has won Tonys himself for the musicals City of Angels and Chicago), stars as the charismatic West German chancellor Willy Brandt. From 1969 to 1974, Brandt tried to unify Germany under democracy, but was brought down not only by booze, women, and depression, but by the politically devastating revelation that his personal aide, Günter Guillaume, played by Richard Thomas, was an East German mole. “After many months of serving the theatrical equivalent of half-thawed TV dinners,” declared Ben Brantley, writing for the New York Times, “ Broadway has finally delivered a juicy gourmet’s banquet of a play.” Other critics proved less hungry, dismissing the play as a “snob hit.”