At the April 1990 annual meeting of the American Society of Newspaper Editors (ASNE), Oakland Tribune senior vice president Leroy F. Aarons, who died of heart failure on November 28, delivered the results of a survey he’d conducted on gays and lesbians in the nation’s newsrooms. Aarons revealed that the majority of gay and lesbian reporters and editors were closeted, and that the majority believed newspaper coverage of gay issues was poor to mediocre. Then, his voice choking, Aarons announced, “I’m proud—as an editor and gay man—proud of ASNE for having done this study.” 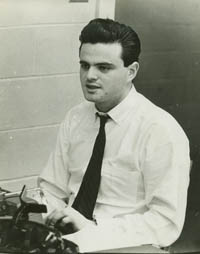 That a top editor of a metropolitan daily newspaper would announce publicly that he was homosexual was a rare enough occurrence fifteen years ago to be newsworthy. The New York Times called Aaron’s announcement “perhaps the most memorable occurrence” of the meeting. After the meeting, as he recently recalled on a journalism Web site, he received letters and cards, asking such questions as “What do we do now?” “Can we get together?” “Do you know anybody else gay at my paper?” A few months later Aarons gathered five people in his dining room to create the National Lesbian and Gay Journalists Association (NLGJA). The group now has more than 1,200 members in twenty-four chapters in the United States, and has affiliates in Canada and Germany.

Roy Aarons began his career at the New Haven Journal-Courier, where he was hired as a copy editor after serving in the U.S. Navy for two years. By age twenty-seven, he was the paper’s city editor. He joined the Washington Post in 1962, serving over the years as assistant city editor, pop-culture reporter, and national correspondent in New York City and Los Angeles. He was the reporter who told Senator Robert F. Kennedy that Martin Luther King Jr. had died. Only months later he covered Kennedy’s funeral. Aarons also reported on the Newark, New Jersey, race riots of 1967 and traveled with the Beatles on a tour bus from Detroit to Cleveland in 1966. He covered the Israel-Lebanon war as a freelance writer for Time in 1982.

The following year he was named features editor of the Oakland Tribune, which his friend Robert Maynard had recently purchased. Aarons was a demanding editor whom many considered a mentor. He became the executive editor, then senior vice president of news. Under his tenure the paper won a Pulitzer Prize for photojournalism for its coverage of the 1989 Loma Prieta, Calif., earthquake. He was a founding board member of Oakland’s Maynard Institute for Journalism Excellence. 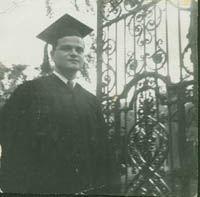 Courtesy Aarons family
Aarons at the gate, 1955.
Aarons left the Tribune in 1991 and went on to write the 1995 nonfiction book Prayers for Bobby, about a mother who learns to accept her gay son only after he dies. He also coauthored a docudrama about the Pentagon Papers that won the Corporation for Public Broadcasting’s Gold Award. He wrote the libretto for an opera about the affair between Thomas Jefferson and his slave Sally Hemings. In addition, he wrote a fictional opera about a woman who lost her husband on September 11, 2001. He was working on a play about South Africa’s Truth and Reconciliation Commission at the time of his death.

In 2000, he conducted a second newsroom survey, finding that more than 90 percent of gay journalists were now out of the closet at work, but that the majority still believed coverage of gay and lesbian issues was inadequate.

Aarons had perhaps his greatest impact as the first president of the NLGJA. “Knowing that such an organization existed affected me deeply,” journalist Dan Woog ’75 wrote in an e-mail to the BAM after Aarons’s death, “and gave me the courage to come out to my colleagues, and in my newspaper column.”

Woog attended the organization’s first convention, in San Francisco. At its conclusion, members joined the city’s Pride Parade. “We marched proudly,” Woog recalled, “laughing, waving, making up chants as we went along. And proudest of all, leading the pack, was Roy Aarons.”

Aarons, who lived in Sebastopol, California, had recently been battling cancer. He is survived by his partner, Joshua Boneh, 626 Gold Ridge Rd., Sebastopol 95472; and a brother.

Reader Responses to Pride and Prejudice