Solo on the High Seas

Joe Harris relishes a challenge. last June, six months removed from rotator cuff surgery, he sailed solo from Plymouth, England, to Boston in the TransAt 2004—tacking nearly 4,000 miles into the wind—and finished second in his class. This summer, ten weeks following ACL replacement surgery on his right knee (which he tore skiing Utah powder in February), Harris will slip on a brace and set sail—solo again—in the Newport?–Bermuda Race. In 2006, he plans on tackling the epic Five Oceans solo circumnavigation race. It’s anybody’s guess what physical handicap he’ll be recovering from by that time. 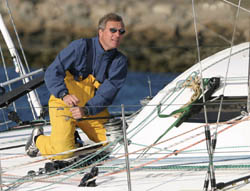 “What attracts me to solo sailing is that you’re the master of your own destiny,” says the forty-five-year-old. “If you’ve done a good job preparing, you’ll succeed. If you haven’t, you’ll fail.” During the sixteen days of the TransAt, Harris faced gale-force winds, twenty- to thirty-foot waves, water temperatures in the mid-thirties (“bracing,” Harris says, laughing), and mechanical problems aboard his fifty-foot monohull, Gryphon Solo (dubbed the Wells Fargo American Pioneer by his title sponsor).

“You always worry about your boat, but it worked fine,” says Harris. “That was the result of an awful lot of attention to detail and preparation. Whatever you forgot, the sea will find.” Then there were biomechanical hazards, sleep deprivation being the trickiest. He trained with a specialist for months beforehand, mastering the art of “cluster napping,” which allowed him to sleep in twenty-minute intervals, waking briefly to check the yacht’s main components.

His shoulder, vital to winch the yacht’s sails, held up fine. That was crucial during the worst night of the race, when winds and waves disabled three sixty-foot boats just ahead of him. “I had to change a sail, and was definitely fearing for my welfare. It’s times like that when you question why you’re out there, why you put yourself at risk. It’s the solo aspect that adds the additional risk. There’s always the fear of being washed overboard, and then it’s game over.” (His journal of the trip is at gryphonsolo.com.)

“I have no desire to leave this earth before my time, but this is part of what makes me who I am,” says Harris, a real estate executive at the New Boston Fund who is married and the father of two rambunctious sons, seven-year-old Griffin and twenty-month-old Emmett. “I go after my dreams, and that’s something I hope my children will do too.”

Brion W. O’Connor is a freelance writer in Hamilton, Massachusetts.

Reader Responses to Solo on the High Seas