A group of Iraq War veterans invaded campus this fall to provide the local public-policy wonks with a ground’s-eye view of the conflict. The soldiers were part of a two-day symposium, “Front Line, First Person: Iraq War Stories,” sponsored by the Watson Institute for International Studies. Its purpose, according to Watson Institute visiting fellow Deborah Scranton ’84, was “to bridge the disconnects between those who serve in the war and those who don’t.”

About forty journalists, activists, bloggers, filmmakers, professors, and students participated. As Scranton, a documentary filmmaker who organized the symposium, told the audience: “The more narratives we can get out there, the more you can make up your own minds.” 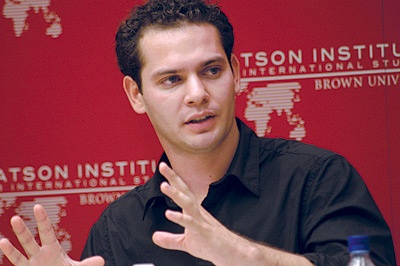 The cognitive disconnect between academics and soldiers became clear when a graduate student in political science asked the veterans on one panel, “What do you feel towards your enemy?” He added that he was interested because his dissertation was on empathy. “It’s kill or be killed,” a military officer in the audience responded. “That’s all you think about.”

In a discussion entitled “The Ground Truth from Iraq to the Beltway and Back” participants offered views on the war that they believe the public is not hearing. Iraqi war veteran and current Brown student Eric Rodriguez ’08 said there was “a humanistic component” to the war that gets overlooked. Too many Americans, he argued, don’t know about the complex and often idealistic motives soldiers have for going off to war. In his case, he said, he enlisted in the army because some of his relatives were involved in drug dealing and he “wanted no one to look at my family and say we weren’t American. I was willing to give my life for that.” He said his experience in Iraq between 2003 and 2004 had been a good one overall. “I don’t regret it,” he said, “I am a better person for having gone to war.” 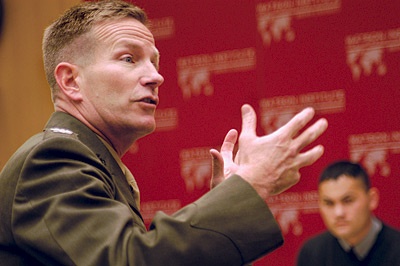 Matthew Burden, who served in the first Iraq war and left the military in 2001, said he took up blogging to counteract what he said was the media’s failure to cover “all the acts of kindness that go on” in Iraq. But he also said the press can make the war seem action-packed when, for the average solider, it’s “Iraq, working for five dollars a day. As the twenty-six-year-old Al-Attabi puts it, “In just a few years, I’ve had enough experiences to last me a lifetime.” Al-Attabi was hired a mere two months after the invasion. A Shiite with a master’s in English literature, lot of boredom and a little bit of excitement.” Burden’s blog, Blackfive (blackfive.net), became the basis for his book, The Blog of War: Front-Line Dispatches from Soldiers in Iraq and Afghanistan.

Former Rhode Island Senator Lincoln Chafee ’75, the only Republican to vote in 2002 against authorizing the Iraq War, offered another view. The legislation, he said, “made no sense. They just wanted to go and get somebody.”