Why is it that some children develop such diseases as asthma, autism, and diabetes, while others grow up healthy? What causes birth and mental health disorders? Genetics? Environmental toxins? Vaccinations?

Researchers at Brown are about to address these questions in one of the most comprehensive looks at childhood disease ever attempted. The National Institute of Child Health and Human Development has given the University a five-year, $14.1 million contract to join the National Children’s Study, a research project that will track the health of 100,000 children from before birth until they become twenty-one. The study, which will begin in 2009, is the largest long-term study of children’s health and development ever conducted in the United States. 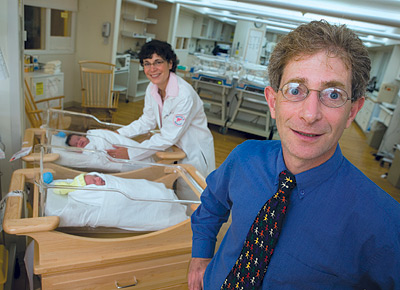 Scott Kingsley
Assisting Brown researchers will be colleagues from Women and Infants Hospital and from many other state and community organizations, including the Rhode Island Department of Health, the City of Providence, the City of Pawtucket, Memorial Hospital of Rhode Island, and Landmark Medical Center.

“Many studies have examined the causes of disease and the contributors to quality of life,” says Constance A. Howes, president and chief executive officer of Women & Infants Hospital, “but none has as much potential to improve the overall status of children.”

Brown’s is one of twenty-two research centers in twenty states taking part in the study. In Rhode Island, investigators will interview more than 10,000 households selected at random and enroll a representative sample of 1,000 children from Providence County. Researchers will visit families beginning in the first trimester of pregnancy, will gather blood from children and their parents, and will collect samples of the air, water, soil, and dust from the children’s environments. Researchers will study everything from what the children eat and which playgrounds they use to what kinds of prescription and over-the-counter medications they take.

“The Environmental Protection Agency is a major supporter of the study,” says Stephen L. Buka, principal investigator of the National Children’s Study center in Providence. “So, we’ll be looking at the whole range of environmental hazards. In the Providence area, two of our main concerns are lead levels and organic chlorines or PCBs.”

Buka, a professor of community health and director of the Center for Population Health and Clinical Epidemiology, has extensive experience in long-term research studies into the causes and prevention of psychiatric and cognitive disorders in children, youth, and adults. Buka was director of the New England Family Study, a forty-five-year, three-generation analysis of 17,000 infants aimed at identifying the causes of such medical disorders as schizophrenia, cardiovascular disease, and substance abuse.

“Although this is a longitudinal study of children’s health,” she says, “some of the early findings from the study will relate to maternal health during pregnancy and birth outcomes.”

The study aims to decipher how independent health dangers work together to threaten the health of children. What are the biological, chemi- cal, physical, and psychosocial dangers for pregnant women, for example, and how do they affect birth outcomes, child development, and the onset of various medical conditions? The researchers believe the study has the potential to provide the basis for new disease-prevention strategies, better health-and- safety guidelines, and more effective treatments and cures for disease.

Reader Responses to Study the Children