Director Doug Liman thrives on chaos. He’s notorious for reshooting, recasting, and rewriting on the fly—and for infuriating his backers in the process. So now, lolling on a couch in a 20th Century Fox editing suite, he’s worried. He’s putting the final touches on his new thriller, Jumper (which opens February 15), and the studio execs are happy. Nobody’s out to kill him for running over budget or missing deadlines. “Does that mean I’m selling out?” Liman wonders. 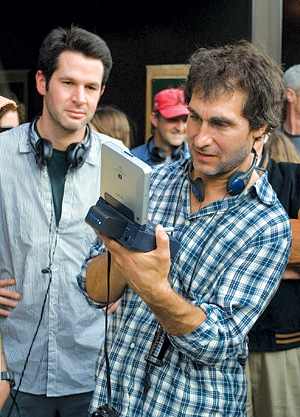 There’s a reason Hollywood executives are cutting Liman slack these days: His 2002 movie, The Bourne Identity, grossed $214 million. He followed that with the 2005 Brad Pitt–Angelina Jolie hit, Mr. & Mrs. Smith, which has earned $478 million worldwide.

Sitting next to Liman in the editing studio is Simon Kinberg, who wrote Mr. & Mrs. Smith and is a writer-producer on Jumper. “Doug creates this all-hands-on-deck environment where the best idea wins, whether it comes from an assistant, an actor, the writer, a producer,” Kinberg says. “If a better idea shows up a week later, we’ll re-shoot that scene.” While the flux is “maddening for people who want a stable movie set,” Kinberg says, “We thrive on pressure and urgency. It gives us a certain focus and strange calmness.” Kinberg says he does his best work in “the open, chaotic, crazy environment that Doug creates.”

Based on a young-adult sci-fi novel by Stephen Gould, Jumper stars Hayden Christensen as a teleporting Everyman who conceals his superpowers from his girlfriend (Rachel Bilson), while being pursued by a mysterious “Paladin” (Samuel L. Jackson). It was filmed in London, Tokyo, Egypt, Rome, Paris, Prague, New York, and Toronto.

“Comic-book movies like Spider-Man have a pretty specific formula,” Liman says. “Somebody’s determined to destroy the world, and the hero has to stop them. At some point the villain grabs the love interest of the hero, and there’s your third act. We don’t have that. In our movie the main conflict is never explained.”

Kinberg adds, “We’re deconstructing a genre that usually presents this black-and-white universe of good guys who have the superpowers, and bad guys who are trying to kill them. In Jumper, as soon as you start to feel comfortable with that moral paradigm, we unravel it.”

Both filmmakers studied semiotics at Brown, and they enjoy layering their popcorn movies with subtexts. “We respond to genre films that are actually metaphors for something else,” Kinberg says. “Instead of making a literal movie about ordinary people with a bad marriage, suddenly they have guns in their hands and you have Mr. & Mrs. Smith. Jumper is about somebody who’s running away from his problems and his past. By giving him this superpower we basically just explode that onto a larger stage.”

Furthermore, Liman says, he wanted Jumper to reflect the “ambiguity of conflicts in the Middle East. Our minds were occupied with that when we were working on the script. If I were Iraqi, I don’t know if I’d think of the Americans as liberators or as occupiers. I don’t really know why the Sunnis and Shiites are fighting.”

Kinberg chimes in: “Your average person on a Friday night probably will not be thinking Middle East when they watch Jumper at the multiplex, but then, no one thought Iran Contra when they saw Bourne Identity.”

Liman completes his friend’s thought: “Hopefully Jumper will feel honest and relevant and people won’t even know why. It will just be: ‘Oh, this movie’s sort of cool and it feels real.’ ”

Hungering for contact, celebration, and a feeling of lightness.
The Arts

Reader Responses to Deconstructing a Genre