Children at Play, the new book by Howard Chudacoff, the George L. Littlefield Professor of American History, tracks the way children have played in the United States from the 1600s to today. 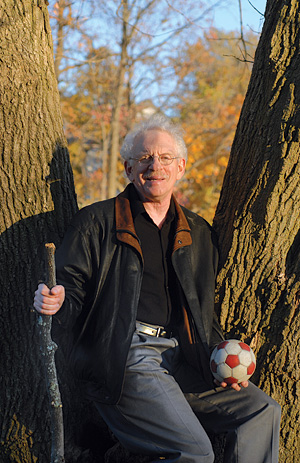 BAM You don’t have kids. What about this subject hooked you?

Howard Chudacoff The real inspiration was a wonderful [1983] book I read by Robert Paul Smith, called Where Did You Go? Out. What Did You Do? Nothing. It showed how children protected their world, their own independence, from adults.

BAM Has that changed?

HC In the last thirty years or so, children have had less ability to carve out that world for themselves because they live in a far more structured environment. Children have had this kind of schizophrenic existence, where adults have always wanted to protect them and guide them, while at the same time kids are kids, and they want to do things in their own way.

BAM When did play become so structured?

HC Certainly from the early 1970s onward, with the expansion of organized play. You had Little League and you had ballet lessons and all this kind of stuff much earlier, but by the late twentieth century, middle-class parents and upper-class parents had a greater obsession with trying to enrich their children’s lives with adult-imposed structures.

HC There were still vacant lots, city streets, fields and forests, but also there were far more things to play with. Kids had Lincoln Logs and Tinkertoys and board games that they could play with in a certain kind of way, but they could also improvise—as opposed to the electronic toys of the late twentieth century that either had a backstory that could constrain the play or were configured so you could only play by the rules of the toy manufacturer.

BAM In your book you write that the whole idea of play has really narrowed over time. How did that happen?

HC In many ways. If you just look at things like sports, we really have focused on them in a way that has become work rather than play. Another way is that all socioeconomic groups—especially lower-income groups—have to protect children by having them sit in front of the television set, rather than letting them go out on the streets. So parents tolerate TV watching or playing with an Xbox as a means of keeping the kids occupied and safe.

HC That seems to be a special consequence of it. There’s less group play now than there was in that golden age.

BAM What in this really surprised you?

HC In reading children’s diaries what fascinated me was both the creativity and the mischievousness of children. I guess it was the daring walking along the top of the fence where they might fall off and break their arms. The secret play spaces they created in barns and in woods and in vacant lots. It was just heartening to see.

HC When adults ask me, “What has been one of the biggest changes that has happened in children’s play since you were a kid?” I say, “Well, when you were growing up, what color was your bicycle helmet?” And the response is: “I didn’t have a bicycle helmet.” We are kind of obsessed with child safety, and that doesn’t mean that we shouldn’t be, but there’s a difference between risk and hazard. Hazards we don’t want, risk can be useful.