Craving a little baby-boomer black humor in the dark days of winter? Check out Laura Linney ’86 in The Savages, which director Tamara Jenkins calls “a coming-of-middle-age story.” 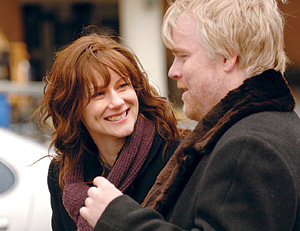 Courtesy Fox Searchlight Pictures
Linney, an Oscar nominee for her role, and costar Philip Seymour Hoffman play siblings Wendy and Jon Savage, forced out of Peter Pan–esque arrested development when their nasty father tips into dementia. Wendy is a struggling playwright surviving on temp jobs while having an affair with her married neighbor—“though she has more affection for his dog,” wrote Rolling Stone’s Peter Travers. Jon, meanwhile, is a Brecht scholar who can’t or won’t commit to marrying his Polish girlfriend, even when her visa’s about to expire. Travers calls The Savages “a twisted, bittersweet pleasure,” while Newsweek’s David Ansen proclaims it an “X-ray of American family dynamics any son or daughter can take to heart.”
What do you think?
See what other readers are saying about this article and add your voice.

Hungering for contact, celebration, and a feeling of lightness.
University News