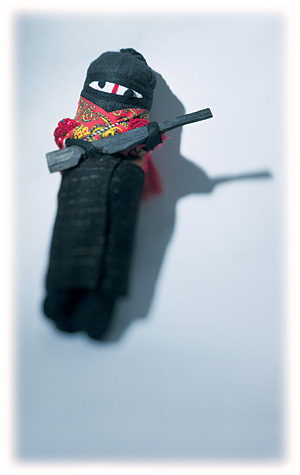 For generations the women of Chiapas, Mexico, have crafted handmade cloth dolls. Chiapas is Mexico's southernmost state and among its poorest; the majority of people are farmers, and they speak their own indigenous languages. In the 1980s local revolutionaries calling themselves Zapatistas rebelled against state neglect. The figures of the masked rebels were broadcast worldwide and becme iconic images of the little guy fighting globalization.

The crafty ladies of Chiapas were quick to find an income stream in the rebellion: to sell to tourists they started sewing little Zapatista dolls, which they adorned with tiny machine guns and dressed in the
protestors’ trademark masks.

While in Chiapas studying ethnography, Thomas Urban ’05 purchased one of the dolls for the Haffenreffer Museum of Anthropology’s collection of indigenous artifacts from the Americas.

The doll is among the 150-plus items from Brown museums, libraries, and galleries that are on display through May at the Annmary Brown Memorial. American civilization students curated the show. Called “From A.A. to Zouave: Collections at Brown,” it contains the coffeepot A.A. founders Bill W. and Dr. Bob famously drank from, a knit cap from a Civil War Zouave regiment, and objects starting with all the
letters in between.

Reader Responses to No Baby Doll