The Czar of Transfat 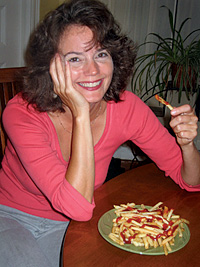 Laura Stanley tastes trans-fat-free oils, one fry at a time.

Stanley, a longtime food writer, is the director of New York City’s Trans Fat Help Center, although she’s more widely known as the city’s “trans-fat czar.” Her job is to help New York’s 30,000 food-service establishments comply with a strict new law banning the use of all but tiny amounts of trans fats in the food they serve. Most trans fats are unsaturated fats—made by partially hydrogenating plant oils—whose high melting point make them particularly useful for baking. They’re cheaper and have a longer shelf life than natural fats, which makes them ideal for mass-produced products that need to sit on a store shelf for a long time. Trans fats, Stanley says, are “entrenched in the way we bake.”

Unfortunately, trans fats also raise the body’s LDL, or “bad” cholesterol, level and have been linked to coronary heart disease. While that link is almost universally accepted by scientists, less conclusive studies suggest that trans fats may also increase the risk of cancer, diabetes, liver dysfunction, and even infertility. “The evidence is absolutely solid,” Stanley says, referring to the coronary studies. “Trans fat is bad for us.”

Late last year New York became the first city in the country to ban trans fats. In July, restaurants were banned from using them for frying, and next July no one in New York City will be able to make or sell baked goods containing trans fats.

What’s a baker to do? That question is what drove Stanley’s summer cake-eating frenzy, which was a search for viable trans-fat alternatives. Certain fats made from palm oil struck her as good alternatives; at least they passed her taste test. “The differences between these fats and trans fats were negligible,” she says.

New York is fining restaurants between $200 and $10,000 for failing to comply with the new law, and Stanley and her staff have been fielding calls from “bakers who are completely freaked out,” she says. “They don’t know what they are going to do.” So she eats. Her goal is point cooks toward options that are affordable and will have a minimal effect on the taste of their wares, she says.

Since New York outlawed trans fats, several other local governments have followed suit, including ones in Philadelphia and in Long Island’s Nassau County. Massachusetts is considering a statewide ban. “I’m very nervous about this,” Stanley says, “but also very excited. What we’re doing is already resonating so much. The world is following.”

Reader Responses to The Czar of Transfat