One of the more common causes of train crashes in the 1800s was out-of-sync watches. Unlike today, there was no official clock everyone could check their watches against. A conductor on one train might think it was ten minutes later or earlier than a conductor on another. If both thought it was time to go down a particular track, and they were headed in opposite directions—well, you can imagine what might happen. 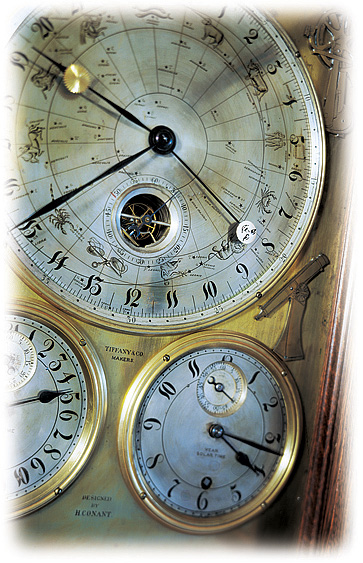 The fix for this hazard was to look to the stars. Astronomers calculated the precise time by documenting the movement of the stars across the horizon. In Providence this was done at Brown's Ladd Observatory just north of the campus. After peering through their telescopes, scientists set the correct time on the clock pictured here. Encased in mahogany and manufactured by the famed Tiffany and Company, it was accurate to several fractions of a second. Every night workers at the Observatory telegraphed the correct time to a central receiving station that then sent the information out to the railroads.

By the 1930s, this method of time keeping had become obsolete. Ladd's equipment soon fell into disuse and today no longer functions. But in December the observatory received $90,000 in grants to restore the system to working order. It won't be used to keep trains running on time, just as a history lesson for visitors.