Hiring talented coaches to lead Ivy League teams is always a risk. They succeed despite the Ivy League ban on athletic scholarships, making them even more tempting to athletic directors at bigger or more athletically oriented schools. 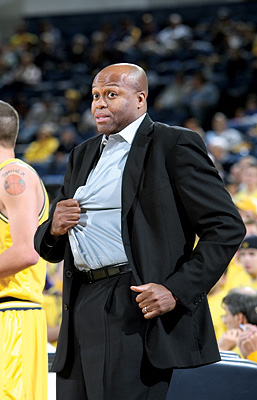 Head basketball coach Craig Robinson is a case in point. Director of Athletics Mike Goldberger knew when he hired Robinson that this rising star might move on to bigger things, but he hoped he would be able to keep him on College Hill for more than two years.

Robinson has been so good, however, that his ascent to the big time has become meteoric. In April, Robinson announced he would become head basketball coach at Oregon State, where, as a member of the Pac-10, he will match wits with such coaching giants as Lute Olson of Arizona and play against such national powerhouses as UCLA and Stanford.

"I'm delighted for Craig," Goldberger said in a press release at the time, "but having him leave Brown is a big loss. Craig did a fabulous job at Brown. He was successful on the court, he connected with the student athletes, and he was a role model for all students. Craig made this a better basketball program."

In his two years at Brown, Robinson won more games—thirty—than any other men's basketball coach, eclipsing the previous mark of twenty-nine set by George E. Allen from 1939 to 1940. Robinson posted a 30–28 record over his two years and guided the Bears to a school record of nineteen victories last season, easily surpassing the earlier high of seventeen wins. His team won ten of its last eleven regular-season games, and posted an 11–3 mark in the Ivy League, the second best in Brown history and good enough for a second-place league finish, behind undefeated Cornell.

"When we found out he actually took the Oregon State job, some of us were pretty upset at first," says forward Chris Skrelja '09. "It wasn't that we were mad at Coach Robinson in any way. It was just that we all had a great relationship with him and a lot of the freshmen were recruited by him. Coach Robinson and I had a great relationship just on a personal level, not even basketball. I wasn't mad. I was really excited for him. It was just kind of disappointing that I was going to have my third coach in four years."

"I'm sure they were disappointed," Robinson says, "but all of them were very supportive. Most of them said, 'Hey, if we had gotten recruited by a Pac-10 school, it would be hard for us to say no, too.' And that is just a tribute to the type of kids that I have been fortunate enough to coach."

In addition to its record wins, Robinson's team this year earned the school's fourth-ever postseason tournament berth, this time in the College Basketball Invitational. (The Bears fell, 80–74, to Ohio University despite thirty-nine points from Damon Huffman '08.)

"I am definitely going to miss the most the confidence that Coach had in me day in and day out," Skrelja says. "The least thing that I am going to miss about him is probably his vocabulary. Sometimes he said some things that just went right over my head. I had to go right in the locker room and get the dictionary."

Robinson (whose sister happens to be married to Barack Obama) also coached Brown to its first-ever season sweep of Princeton and Penn. The Bears took all four games from the Tigers and the Quakers, including a thirty-two-point victory over Penn, thereby handing the Quakers—and former Bears head coach Glen Miller—their largest Ivy loss ever. Robinson also earned wins over Northwestern and Providence College during his brief two years.

"Now we feel like we are starting over," Skrelja says, "but we don't want it to be a rebuilding year. We feel like we have the tools to be successful."

"I'll be excited to watch from afar," Robinson says, "and I still consider them my guys, so I'm excited to see what they are going to do."

Would the players like to play a game against Oregon State and give Robinson the same treatment they gave Miller? "I think we would all love to play Oregon State," Skrelja laughs, "but I'm not sure it's going to happen next year."