"A lot of it is about ripping off the veneer of civilization and seeing what that beast is underneath," Peter Sinn Nachtrieb says about his work. He could be referring to the lamb slaughter, wrestling, and S&M in his 2006 play, Hunter Gatherers, or the leg bashing, food hoarding, and frenzied mate chasing that goes on in his latest work, boom. Nachtrieb, who at thirty-three is one of the country's best emerging playwrights, is constantly crisscrossing the thin line that divides civilized man from the animals. The result is silly, absurd, despairing, and profound—what he calls a succession of "gleefully alarming moments." 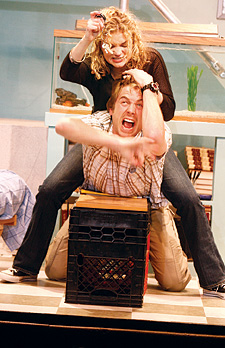 Nachtrieb grew up in the San Francisco suburbs, the son of a business-lawyer father who played tuba in a polka band and a German-born mother who at bedtime read her children the macabre Struwwelpeter stories (Mark Twain translated them into English as Slovenly Peter). Nachtrieb grew to be six feet, six inches tall, which, as he notes on his blog, means "my nose hair," is readily viewable by the majority of people."

At Brown he concentrated in theater and biology and notes that boom "is my way of figuring out why I majored in both." boom first premiered as part of the 2007 Brown/Trinity Playwrights Rep, a festival of new plays that has seen many of its featured shows go on to achieve national prominence. Nachtrieb's work was picked up by the Ars Nova theater in New York and opened in the spring. It is about a nerdy, gay marine biologist and a horny coed who get together on a blind date and wind up the only survivors of an apocalypse that destroys the planet. Their behavior grows increasingly atavistic as man, desperate to perpetuate the human species, pursues woman, who's not so sure she's ready for such a big commitment. Meanwhile, the fish the biologist keeps in a tank in their shelter quietly go about the business of plotting their survival. Life will go on, but not as we imagine it—that's the glory of evolution, Nachtrieb suggests. The New York Times said in its review, "At first glance boom suggests a Twilight Zone episode rewritten as a sitcom. But it winds up speaking, quietly and piquantly, to our enduring fascination with and need for myths about the beginning of life as well as its end."

After college, Nachtrieb moved back to San Francisco and starred in his one-man play, The Amorphous Blob, in which all the characters are swallowed up by a blob as a whirlwind of black plastic bags is pulled across the stage by pulley. But his breakthrough hit was Hunter Gatherers, which was produced by the absurdist comedy troupe Killing My Lobster, which had been founded at Brown before moving to San Francisco.

Nachtrieb describes this play as Lord of the Flies meets Who's Afraid of Virginia Woolf? Two married couples sit down for a dinner party, and what starts out as a pleasant evening quickly disintegrates into a sex-fueled bacchanal where everyone's basest instincts rise to the surface. Nachtrieb says he wrote the play with a specific challenge in mind: "How can I get every primal urge that animals have to survive and reproduce into one play set in a nice loft apartment?" It's both hilarious and horrifying, which may be why, according to Nachtrieb, there were plenty of walkouts when the play moved to the Wellfleet Harbor Actors Theater on Cape Cod.

Hunters and Gatherers earned Nachtrieb one of the country's top playwriting honors, the 2006 Harold and Mimi Steinberg/American Theatre Critics Association New Play Award. The $25,000 prize money allowed him to quit his day job as a Web designer and write full-time. He is currently working on a commission from the Encore Theatre Company in San Francisco for a play about a teenager who witnesses something terrible from her bedroom window. It contains echoes of Hitchcock's Rear Window, only in this case the girl doesn't hire a detective to investigate—she blogs about the event and photographs it with her Web cam. Nachtrieb says the idea came to him at a concert by pop idol Kelly Clarkson: "This teenager was called up onto the stage to sing, but she was so excited she spent the whole time getting her cell phone in place so she could capture the moment rather than enjoying the moment."

And he has a commission from South Coast Repertory Theatre in southern California. "It's about myths, but that's about as far as I've gotten so far," he says. You might say that, like the characters Nachtrieb writes about, the play's still evolving.

Reader Responses to The Gleeful Alarmist