if, as the british novelist L.P. Hartley once observed, "the past is a foreign country," there are few better tour guides to this alien land than journalist-historian Tony Horwitz. In such wise yet witty works as Confederates in the Attic and Blue Latitudes, Horwitz ferried readers through time and space, revealing the ghosts from the past that continue to haunt the American South and the far-flung islands of the Pacific. In his latest work, A Voyage Long and Strange, Horwitz turns his attention to what would seem at first glance a familiar subject: colonial North America. In his hands, however, the ordinary quickly emerges as anything but. Although popular legend traces America's origins to the Mayflower's landing at Plymouth Rock in 1620, Horwitz points out that the Pilgrims were actually latecomers to the New World. For more than a century, other Europeans had trekked, traded, and plundered their way across the continent. It is this vast terrain of early encounters—the strangely little-known "foreign country" of colonial North America—that Horwitz maps with characteristic verve in A Voyage Long and Strange. 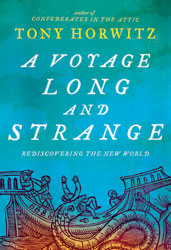 His efforts to retrace the routes of the first European arrivals to the "New World" take him from Newfoundland, where Eirik the Red established a short-lived Viking settlement in 1000 A.D., to Florida, where in 1539 Hernando De Soto rampaged through the region's Indian communities, to Kansas, where Francisco V√°squez de Coronado's search for the fabled golden city of Quivira petered out in 1541 among the endless grasslands of the Great Plains. Horwitz tells their stories with his trademark mix of history and journalism, closely perusing the historical record while capturing present-day inhabitants' often-eccentric relationship with the past. In Confederates in the Attic, Horwitz tagged along with a group of hard-core Civil War reenactors attempting to recreate the experiences of Confederate veterans down to the most minute detail. In A Voyage Long and Strange, he again hooks up with reenactors (this time Vikings and Conquistadors, both seemingly less hard-core than their Civil War counterparts) as well as descendants of some of the Native American communities so radically transformed by the Europeans' arrival. These latter episodes generate some of the book's most poignant passages—and its most hilarious, as Horwitz recounts his desperate efforts to endure a stifling Micmac sweat lodge.

Nevertheless, Horwitz's beguiling and often conversational prose masks what is, at heart, a project of considerable intellectual sophistication. Seemingly unintentionally, over the past decade he has helped shape the booming academic field of historical memory, which has revealed the surprisingly selective nature of our understandings of the past—the protean and inevitably political ways in which societies remember (and forget) key portions of their history. (Horwitz is not immune: A Voyage Long and Strange pays far less attention to French and Dutch explorers than to their Spanish and English rivals.) But one need look no farther than the dominant place that Plymouth's Pilgrims continue to play in present-day imaginings of "America" to realize the virtues of his latest offering. If the territory Horwitz explores with such aplomb is ever to become a familiar homeland rather than a foreign country, it will be thanks in no small part to books like A Voyage Long and Strange.

Karl Jacoby is an associate professor of history at Brown.

Reader Responses to Before The Rock