with his latest internet venture, Rufus Griscom, the founder and CEO of Nerve Media, has gone from publishing soft-core erotica—"literate smut," he calls it—on the popular site Nerve.com to passing out parenting tips on Babble.com, which he launched in December 2006. The shift from erotica to parenthood may seem surprising, but to Griscom, it felt like growing up. 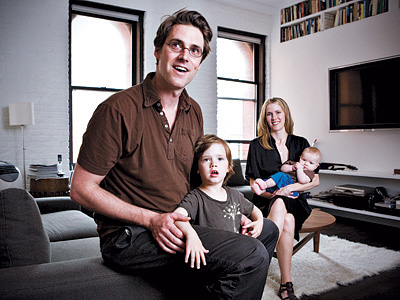 Jared Castaldi
"A lot of people in our office were having kids. I had just had a kid. There was a generational shift going on," forty-year-old Griscom said in a phone interview from his Manhattan office. So he and his wife and copublisher, Alisa Volkman—the couple has two young sons, one age three and one six months—set out to create an online magazine and community for this new generation of parents: thirtysomething indie-rock fans who buy organic food, dress their newborns in Ramones onesies, and crowd city sidewalks with their designer strollers.

According to Griscom, these new parents represent an important demographic shift: they eschew the homogenization of the suburbs and the Disneyfied, pastel portrait of parenting found in most parenting magazines. They opt to raise their children in a more diverse, culturally rich, urban environment. They're also skeptical of experts, on parenting or any other subject. "It's an Internet thing," Griscom says. "There's no single source of information that any parent trusts. It used to be you'd buy your Dr. Spock book, and you'd be done. No parent feels that way today."

That's where Babble comes in. Instead of posing as the voice of authority, it acts as a clearinghouse for a variety of expert opinions. Readers can click through features, blogs, weekly columns, and a user-generated wiki of parenting knowledge, all of which allow them to draw their own conclusions on everything from sleep training to soy formula. Babble also offers readers brutally honest, funny, and irreverent takes on the joys and frustrations of being parents. The site's most popular column is Bad Parent, a weekly feature in which columnists share embarrassing, sometimes criminal, gaffes. One mother confesses to breast-feeding her daughter in a moving vehicle; another admits she bribes her children (with ice cream, candy, the promise of pet hermit crabs) to do absolutely everything.

As Babble toddles into its second year, it boasts a half million monthly readers, nearly half of whom are men. Details dubbed it "the online Bible for hipster parents," and the site was one of five finalists for an online excellence award from the American Society of Magazine Editors. Griscom plans to follow Babble's success with six more online magazine launches from Nerve Media by the end of 2008, including an entertainment site and a site devoted to green living.

He also hopes to find time for some of his own writing. "This whole Nerve/Babble thing has really been an elaborate attempt to not write a beautiful novel," he jokes. "And it's worked! I haven't written a word of fiction in twelve years."