Although it took assistant basketball coach Jesse Agel nearly twenty years to become a Division I head coach, when he was named Brown's new head coach in early June, it was a dream finally come true.

"I always wanted to be a head coach," says Agel, who came to Brown two years ago to assist head coach Craig Robinson. "There are only so many Division I coaches out there. It is a small fraternity, and to have an opportunity to be one of them is a great thing." 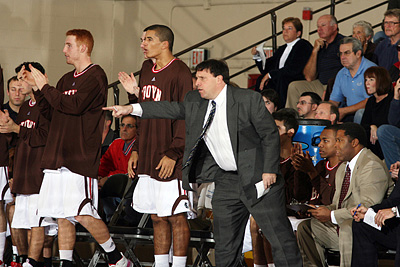 "I'm extremely excited for him," says forward Scott Friske '09. "He's a great guy, and I don't think Brown could have chosen a better coach."

"We had an excellent pool," he says. "What Jesse had that really stood out was experience at this level and an understanding of the Ivy League. He was very well supported by the team. People who got to see him work every day knew what he was like."

Before arriving at Brown, Agel coached for seventeen years at the University of Vermont, eight of them as associate head coach under Tom Brennan. In Burlington, Agel helped guide the Catamounts to three consecutive America East titles and NCAA tournament appearances, including a memorable upset victory over Syracuse in 2005.

At Brown he helped lead the Bears to their most successful season ever in 2007–08, winning a school-record nineteen games and a berth at the post-season College Basketball Invitational. The team finished second in the Ivies this winter, with an 11–3 record.

"Jesse brings a world of experience with him," Goldberger says. "He has demonstrated from his time at Vermont and his time at Brown that he knows basketball very, very well. He knows what is takes to be successful, and he has shown that he can do it."

"He has been in every game situation that we are going to come up against," Friske says. "I think the wealth of experience that he has is going to be a huge part of the success that we plan to have."

Despite losing All-Ivy guards Mark McAndrew '08 and Damon Huffman '08 to graduation, the forty-six-year-old coach believes he can find the right mix with a talented group of returnees and four promising newcomers. "Our goals haven't changed," Agel said. "We are pursuing Ivy League titles year in and year out. That is always going to remain our goal.