A Virtual Friend To Millions

Last September, Randy Pausch responded to the BAM's request for an interview with a heartbreakingly brief e-mail: "Sorry, no time." People frequently respond this way, but coming from Pausch the phrase felt tragic. Then forty-six and the father of three young children, he had pancreatic cancer; a month earlier doctors had predicted he had three to six months of healthy living left. 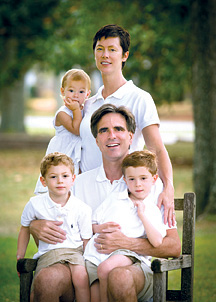 What Pausch did with that prognosis is the stuff of myth. For starters, he joked sardonically, "I doubled my life expectancy," living to celebrate not only Christmas but Father's Day with his family. On July 25 the cancer finally killed him, but he used those bonus months to inspire millions around the globe with a zest for life that the New York Times likened to Lou Gehrig's.

Before his cancer, Pausch was best known for his work in virtual reality. A computer science professor at Carnegie Mellon, he taught a legendarily popular course called "Building Virtual Worlds." A lifelong Disney buff, he helped design Aladdin's Magic Carpet Ride at Disney World. He and his grad students devised 3-D software called Alice to teach students to write computer programs through animation.

But what made Pausch world famous was a lecture he gave last September, as part of what Carnegie Mellon had until recently called the "Last Lecture" series—talks by faculty near the end of their careers. Pausch and his wife, Jai, had decided he would devote what time he had left to building memories for their kids, moving from Pittsburgh to Chesapeake, Virginia, to be near Jai's sister and her family. Still, Pausch decided to go ahead with the lecture, despite the fact that it would mean missing Jai's birthday. He called it "Really Achieving Your Childhood Dreams" and let on that his real intention was to leave his kids a video record of their dad—a message in a bottle, he said. More than 400 of his friends, colleagues, and current and former students packed the auditorium that night.

Refusing to be maudlin or reverent, Pausch showed his most recent CT scans on a huge overhead screen and boasted that he was in better shape than anyone else in the audience, doing a few one-handed pushups to prove it. Sharing his childhood dreams that night, he encouraged his audience to achieve their own—or, better still, help others reach their dreams. Many in the audience wept when he presented Jai with a birthday cake.

People in the room that night knew they'd witnessed something special, but no one could have imagined just how special. A video of the speech quickly made its way onto YouTube, and word of it spread quickly via blogs and e-mail. Jeff Zazlow, a Wall St. Journal reporter who'd driven to Pittsburgh on a hunch, wrote about the lecture in the Journal. Pausch appeared on Good Morning America and Oprah; in April, 20/20 devoted an hour-long episode to his story. ABC World News Tonight named him one of their "Persons of the Year." He appeared before Congress to talk about pancreatic cancer. And, loyally, he gave the BAM a series of interviews by cell phone while bicycling around Virginia. (The article, "It's Not Time Yet," ran in the November/December issue; read it at brownalumnimagazine.com) Pausch and Jeff Zazlow coauthored a book that has been on the best-seller lists since its publication last spring.

At the time of Pausch's death, an estimated 10 million viewers had watched his lecture online. Then Primetime Live ran an hour-long special on Pausch's life pushing the numbers even higher.

Randy Pausch may be physically gone, but the dreams of millions of strangers seem a bit more achievable today because of the inspiration he left behind.

Reader Responses to A Virtual Friend To Millions