The media throng to nothing quite so avidly as a good disaster, and amid all the personal triumphs and slashed records, the 2008 Olympic Games provided a handful of heartbreaks for U.S. athletes, including fumbled baton passes in both the men's and women's relay races. The most talked-about gaffe of the games may have been a pair of stumbles by gymnast Alicia Sacramone '10, who tumbled off the balance beam and then fell during her floor routine. 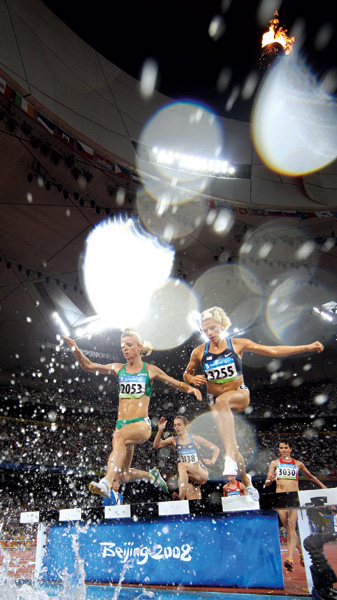 Mark Dadswell/Getty Images
Ireland's Riosin McGettigan and Anna Willard '06, right, soar in the 3,000-meter steeplechase final on August 17 in the Bird's Nest.
Captain of the U.S. team, Sacramone was blamed with costing teammates Nastia Liukin and Shawn Johnson the gold. Overshadowed in all the gasping, however, was the fact that the team won their second consecutive Olympic team silver medal, finishing with 186.525 points. China won the gold with 188.900 points, and Romania earned the bronze with 181.525 points.

In individual competition, Sacramone finished fourth on the vault with a total score of 15.537. China's Cheng Fei won the bronze with a total score of 15.562, despite landing one of her vaults on her knees. "I'm disappointed," Sacramone told the Associated Press, "especially since third place had a fall and I made both of mine. I can't change her score. The judges made up their minds." (Cheng's vaults had higher difficulty values than Sacramone's.)

"I definitely had to pull myself together a little bit, and the last couple days have not been easy,"Sacramone told the AP. "But I went out there and finished my Olympic Games the best way that I could." Sacramone is expected to resume classes at Brown in January.

In other Brown news from Beijing, runner Anna Willard '06 finished tenth in the 3,000-meter steeplechase with a time of 9:25.63, just behind Jennifer Barringer, who set a new U.S. record. "I felt good," said Willard. "I had trouble closing the gap between the girl in front of me. I had a pretty good kick that last lap. I just couldn't turn to the next gear. I'm disappointed, but all in all it has been a good season."

Several Brown crew veterans were on hand in Beijing, although none made it to the podium. Portia Johnson McGee '01 and Anne Cummins won the women's pair 'B' final in a time of 7:33.17. McGee rowed on two Brown crews that won NCAA championships and later coached at Brown, as did her husband, Luke McGee '01.

Liane Malcos '00 was an alternate on the U.S. women's team, and Igor Boraska '94 was a member of the Croatian Olympic team, but did not compete.

Brown assistant track and field coach Jerome Romain coached Dominica's Olympic team in Beijing. He represented Dominica at the 1996 Games in Atlanta, where he made it to the finals in the triple jump.

Hungering for contact, celebration, and a feeling of lightness.
Ever True

Reader Responses to Brown In Beijing