David Kennedy '76 is fond of citing John Hay, class of 1858, who as secretary of state called for European powers to join the United States in an Open Door Policy toward China at the end of the nineteenth century. "It's time for a reverse open-door policy," Kennedy says, arguing that to thrive in the twenty-first century Brown must open its doors wider to the world. 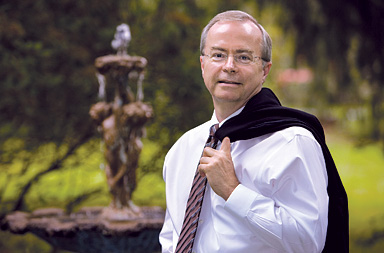 In a new position as Brown's vice president for international affairs, Kennedy returned to College Hill last January from Harvard Law School, where he has taught international law for twenty-five years, focusing on issues related to global governance. His mandate, broadly put, is to "ensure that Brown is a truly global university"—a goal that came out of last September's report by the Committee on Internationalization and that has become a key aspect of the second phase of the Plan for Academic Enrichment.

Many U.S. universities are creating positions like Kennedy's to help them better prepare students for a global economy and a shrinking world. He says the key question for Brown is how to do so in a way that expresses its unique identity. One distinctive element will be an interdisciplinary approach to solving global problems, an intellectual style he believes has been made possible by the University's relatively small size, and made necessary by economic realities. Kennedy sees Brown's openness to interdisciplinary approaches as a by-product of its curriculum, in that students find common interests among faculty and in so doing create links that then become institutionalized in programs and centers.

Similarly, Kennedy believes that Brown's location predisposes its faculty to think creatively about global issues. "If you're a big think tank located in Washington or New York," he says, "you tend to run with the pack in terms of what the problems are and where the solutions might lie. Being a little removed from that, we can ask questions that will fuel the next cycle of policy making rather than the one that's on the front burner in Washington or New York today. Being well known for asking different kinds of questions is one of the things that makes Brown unique."

In his new role, Kennedy oversees the Watson Institute and is serving as its interim director. He has been meeting with social science department chairs to explore how the institute can collaborate better with them on such issues as faculty recruitment, graduate education, and research. The question, he says, is: "How can we as a research faculty at Watson play a stronger role in the University's broader pedagogic enterprise?"

"Brown could be a Davos for young intellectuals," Kennedy says. Next summer he plans to inaugurate a major international institute on campus, bringing together 100–200 young scholars from emerging markets and third-world countries. "It's very difficult for junior faculty in China or Singapore or Bogot√° to be in touch with one another," he says. "That's a contribution Brown could make—ensuring that a young anthropologist in Cape Town knows what young anthropologists in Santiago are doing." As a pilot project, the Office of International Affairs ran four smaller institutes this summer, bringing international scholars to campus to discuss issues such as globalization and inequality, global governance, and the relationship between archeology and memory in developing countries.

In another effort to bring the world to campus, Brown is appointing more visiting faculty and research fellows. Among next year's visitors will be Justice Dennis Davis, a member of the South African High Court and a leading participant in the negotiation of its constitution. He will teach two courses, including one on social justice and constitutional reform.

Brown students wishing to study abroad now have more than fifty Brown-sponsored programs and another 130 University-approved programs to choose from, but that's not enough, Kennedy says. "Being well traveled isn't the same as being worldly. You have to find a way to use your relationship to the world to deepen your awareness of the thing that you're studying." He aims to increase options for undergraduates to work and do research abroad: "more internships, more shorter-term programs—not just junior year," he says. This summer, the Office of International Affairs and the Dean of the College upped the number of international Undergraduate Teaching and Research Awards, giving $3,500 grants to fourteen students and eight professors for research in countries ranging from Scotland to Macedonia. "We're encouraging departments and programs to build international tracks into their undergraduate concentrations," Kennedy says, "and we're hoping that a part of those tracks will include an experience abroad where that's appropriate."