Dorm rooms can be great incubators. Sergey Brin and Larry Page developed the Google algorithm while graduate students at Stanford. Michael Dell built his first computer as a University of Texas undergrad. To those techie legends perhaps some day will be added the story of how Ben Finkel and Andrew McClain, both '03, met in the bowels of the New Pembroke Dorms, devising a computer animation project for a course called "Truth and Beauty in Art and Science" that so impressed the professors that they asked them to present it to the Brown Corporation. Finkel and McClain's latest project is Fluther.com , a combination social networking and Q&A site powered by its users' expertise—think Wikipedia blended with Ask.com, a dash of Facebook to personalize the mix, and a humorous design that makes the whole package both hip and winsome. 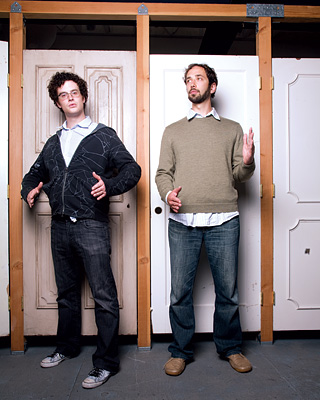 Fluther's roots, however, are all on College Hill, McClain says. "Founding Fluther seemed like the natural extension of the work we did at Brown—dive into an interesting project with really smart, passionate people, work on all aspects of it, and see what happens."

Finkel is more specific, tracing the company's inspiration to the primordial soup of the Sun Lab, where they and other computer science students would spend the wee hours exchanging ideas. "People in the lab were always willing and able to help with your problems; you just had to know who to ask," he says. "We imagined the whole Internet could become a lab where people would happily help each other, if we could only connect them."

This cooperative ethos differentiates Fluther from sites such as Yahoo! Answers. "There are key technological differences," says McClain, "like the fact that [on Fluther] you can see people responding to you in real time, and we match your question with people who are likely to know the answer. But the real difference is our community." And that, he says, is what turns casual visitors into regulars.

"Most people have a lot of expertise in their specific area," Finkel says, "whether it be Hello Kitty dolls or nail clippers. And people find it really satisfying to share that knowledge."

At Brown, Finkel and McClain spent much of their time together, collaborating on everything from computer science projects to an underground improv comedy group called Steam Powered Robots. Their business partnership, however, has been hampered by distance: Finkel lives in San Francisco and McClain in Los Angeles. Many days, says Finkel, "We spend six hours video chatting."

But there are benefits to a long-distance business partnership, says McClain. "If your partner gives you lip, you can 'accidentally' close the video chat window."

This next year is crucial for Fluther; its ability to maintain its high quality of answers as its size increases will determine whether it becomes the next Twitter or Yelp. Finkel and McClain are sanguine. "Basically with everything we did with Fluther we just jumped in and tried to figure it out," says Finkel. "You can't learn this stuff. You just start messing around and see what happens." He pauses for a moment, then continues. "Starting a company is really just like doing a project in college. Except there's no due date."

Michael Lukas lives in San Francisco and is working on a novel.

A gustatory history of freshman roommates who became lifelong best friends.
Ever True