The old adage is that defense wins championships, but so far a high-powered offense has been the key to success for Head Coach Phil Estes. This year looks to be no exception.

Regarded as one of the top offensive strategists in the Ivy League, Estes has produced some of its most potent offensive attacks and has brought the Bears two Ivy titles. With the return of ten of eleven starters on that side of the ball—including All-Ivy players in key positions—the Brown offense should produce record-setting numbers in 2008. The open question is defense, where the team surrendered more than 454 yards per game last season. "We have to play better defense" to challenge Ivy champions Harvard and Yale, Estes says, "and if we can do that we are certainly going to be contenders."

Leading the Bears' offense is second-team All-Ivy quarterback Michael Dougherty '09. In his first full season under center, Dougherty led the league in passing and became the fourth quarterback in Ivy history to throw for more than 3,000 yards in a season. "He might have been a surprise to the rest of the league last year, but not to us," Estes says. "It was just a matter of him getting his timing down with the receivers." Dougherty completed 264 passes, fifth best in Ivy history, for 3,039 yards last season. He ranked third in the country in both passing yards (303.3 per game) and pass completions (26.4 per game). 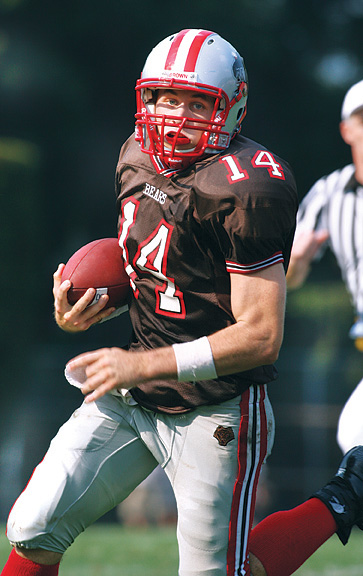 Quarterback Michael Dougherty is the fourth in Ivy history to throw for more than 3,000 yards in one season.

Although Brown lost speedy wide receiver Paul Raymond '08 to graduation, that position is still loaded with talent as the Bears return All-American and All-Ivy wideout Buddy Farnham '10 and All-Ivy receiver Bobby Sewall '10. Farnham, a first team All-Ivy selection, led the Ancient Eight with seventy-eight receptions as a sophomore. That total ranked sixth in the country and sixth in the Brown record book. Farnham also ranked third in the conference with 885 receiving yards, the eleventh-best total in Brown history.

The multipurpose Sewall demonstrated his versatility last season. He played all over the field in the Dartmouth game—rushing for 144 yards on fifteen carries and catching eighteen passes for 141 yards. He rushed for four touchdowns and passed for another. As a receiver, Sewall ranked second in the Ivies and seventh nationally with 7.56 receptions per game.

In addition to receiving, Farnham and Sewall will be used on kickoff returns, giving Brown one of the league's most explosive return tandems.

Speedy tight end Colin Cloherty '09, a second-team All-Ivy pick in 2007, presents his opposition with a dilemma. At six-foot-three and 245 pounds, he's too big for opposing defensive backs, but he's also too fast for opposing linebackers. Last season he hauled in forty-one receptions for 549 yards, the most among Ivy League tight ends.

This season Estes needs a dependable running game to help control the time of possession and keep his defense off the field. "We were a little one-dimensional last year," Estes says. "We need to be able to run the ball and have more of a balanced attack."

One factor in last season's imbalance was an injury to running back Dereck Knight '09. He rushed for 208 yards in the opener against Duquesne, but was injured in the second game, against Harvard, forcing him out for the rest of the season. He should be a major contributor this year. "Dereck is just a big, physical back and he wears teams down," Estes says.

To balance Knight's power running, Estes can turn to Jonathan Edwards '09, a speedier back who can get outside. Last season he rushed for 293 yards and five touchdowns.

Opening holes up front for Knight and Edwards will be an offensive line led by right tackle Paul Jasinowski '10, who earned second-team All-Ivy honors in 2007, and center Mark Callahan '10. Left tackle Shane Kelley '09 has "great feet," Estes says, and will be charged with protecting Dougherty's blind side. Left guard Matt Adkins '09 and right guard Tim Danser '10 are both returning, as is Alex Shields '10, who earned one start last season and can play either tackle position. 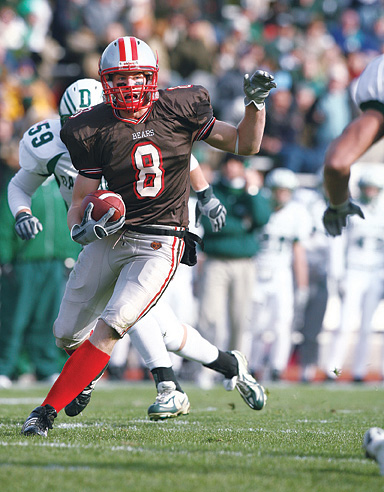 The strength of the Bears' defense is along the defensive line, where Estes can rotate several players. James Develin '10, a six-foot-three-inch, 260-pound defensive end, led the Ivy League with 13.5 tackles for a loss, and earned second-team All-Ivy honors last year.

In the middle of the line, Estes will look to six-foot-four-inch, 280-pound tackle Joseph McPhee '09 and six-foot-three-inch, 270-pound tackle David Howard '09. Seniors Oludare "Wale" Adedokun and Jake Powers should have a significant impact along the defensive line.

Two of Brown's four linebackers, Frank Nuzzo '09 and Jon May '09, earned honorable-mention All-Ivy accolades last season. Nuzzo, an inside linebacker, missed two games due to injury, though, and his health remains questionable this season.

May, who plays on the outside, ranked second in the Ivies last year and sixth in the country with 6.1 solo tackles per game. He ranked fourth in the conference with eighty-nine total tackles. Joining May on the outside is Miles Craigwell '09, who ranked second on the team with sixty-three stops. On the inside, Estes will look to Steve Ziogas '09, who was third last season with sixty-two tackles. Competing for the other inside spot will be Kelly Cox '10 and Munachismo Okoji '11.

In the secondary, cocaptain Darrell Harrison '09, an honorable-mention All-Ivy pick, ranked fourth in the Ivy League with four interceptions. At the other corner, David Clement '10, who made twelve tackles last season, will likely take over that position, with competition for playing time coming from Robert Valenti '09 and Eric Hunt '10. One of the most physical defensive backs on the team, the six-foot-one-inch, 200-pound Chris Perkins '10 will take over at free safety. Jonathon Braun '11 is also in the mix at both corner and safety. 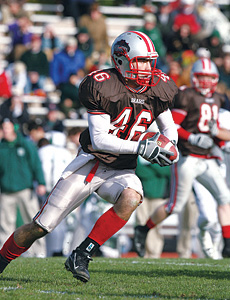 Although Brown lost All-Ivy kicker and punter Steve Morgan '08 to graduation last spring, Estes believes that the Bears' play on special teams has the potential to be even better with Robert Ranney '09. "Ranney has a terrific leg," Estes says. "His leg is probably stronger than Steve Morgan's in punting and kickoffs." Accuracy has been a problem, for Ranney, but, Estes adds, "He has worked on that, so we really have a terrific punter coming back. The biggest question mark is going to be on field goals and extra points."

The Bears have been picked third in the Ivy League media poll, behind defending champions Harvard and Yale, who were favorites with an equal number of first-place votes and points.

"We've got a group of guys that now understand that they are contenders. We're not rebuilding. If they play the way they can play, we can take this whole thing," Estes says. "They have an opportunity here. It is about believing in each other."

All photographs by David Silverman.

Reader Responses to The Contenders