Located seventeen miles from campus on 400 idyllic acres in Bristol, Rhode Island, the Haffenreffer Museum of Anthropology has always seemed a bit of an outlier, not quite fully integrated into the University's academic life. Various University administrations have longed to move the museum closer to campus, and in 1995 Brown even bought the historic Old Stone Bank building in downtown Providence with an eye toward renovating it as a home for the Haffenreffer. The idea eventually fizzled, thanks to the lack of nearby parking and a series of design challenges that made locating a museum there impractical; this year the Brown Corporation voted to give up and sell the Old Stone Bank. 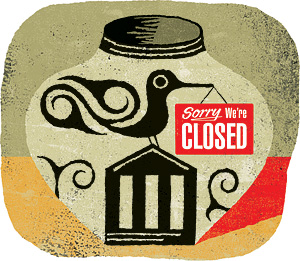 Timothy Cook
This summer, however, the University was forced to act when the Bristol fire marshal cited the Haffenreffer for a laundry list of fire-code and environmental violations and for inadequate handicap access. As a result, on June 27, Brown announced plans to close the museum to the public by the end of August, news that took many on campus by surprise and set off speculation about the fate of the museum, the more than 150,000 ethnographic and archaeological artifacts in its collection, and the 400 bayside acres surrounding it.

The decision came after Provost David Kertzer '69, himself an anthropologist, hired Jeremy Sabloff, the former director of Penn's Museum of Archaeology and Anthropology, to review the situation. "Jerry said it was a valuable collection," Kertzer says of Sabloff's findings, "with particular strengths in Native American, Arctic, African, and South American artifacts. But he didn't recommend investment to bring the Bristol site up to par." Correcting the problems cited by the fire marshal would cost millions of dollars, Kertzer says, money that could be better spent moving the whole operation.

Moving such a museum, whose collection contains innumerable fragile treasures, many made of feathers, textiles, animal skins, and other organic materials, is a gargantuan effort. To protect the items while the University chooses a new location, Brown has installed a better dehumidification system in the Bristol location. Kertzer said that University officials are looking at several possible sites near campus, but some may be suitable only for temporary storage.

Meanwhile, the fate of the spectacular Haffenreffer estate, which overlooks Mount Hope Bay, is similarly uncertain. Named for Rudolf Haffenreffer, who assembled the property in the early 1900s, the land is believed to have been home to Metacom, the Wampanoag leader the colonists called King Philip. Haffenreffer became fascinated by the arrowheads and other Native American artifacts he dug up on the land, and eventually built a museum there to house them. After he died in 1954, his widow and sons gave the property and collection to the University, which has housed the museum and a conference center there. Faculty members in biology conduct field research on the property, and administrators run student programs there as well.

The acreage is also the site of one of New England's most significant Native American artifacts: the hollowed-out stone outcropping known as King Philip's chair, thought to be the place where Metacom met with the Wampanoags. Thierry Gentis, the museum's associate curator and collections manager, says various tribes still use the location for naming ceremonies and as a meeting ground for settling intertribal disputes.

Kertzer says the museum's fate, as well as the future of the Haffenreffer property, will be discussed at the September meeting of the Corporation's Advisory and Executive Committee, and at the meeting of the entire Corporation in October.

Reader Responses to The Haffenreffer Closes