It's the kind of thing a conservative talk show host would have a field day with. At Midtown Community Court in New York City, prostitutes can be sentenced to take creative writing classes. They can also be ordered to take economics classes and attend a self-esteem program. We're talking hours worth of programming on the Fox News channel. 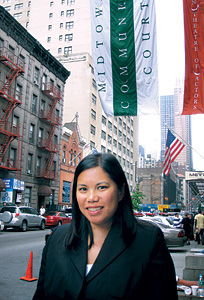 But according to Angela Tolosa, sentences like these make for better, more effective penalties than jail time. Tolosa heads the Midtown Community Court, a fifteen-year-old joint effort between New York State and the nonprofit Center for Court Innovation. The court's operating principle, which has caught on in judicial systems across the country, is that community service, education, and counseling are the most effective ways to deal with misdemeanor offenders.

"Normally, these people go out the door, and then you see them come right back through it the next day," Tolosa says. "We promote the use of alternative sanctions, and we see a lot fewer repeat offenders." Arrests of prostitutes in the Times Square neighborhood, for example, dropped fifty percent in the first three years the court was open.

The typical clients at Midtown Community Court are johns, streetwalkers, juvenile shoplifters, illegal street vendors, and small-time drug dealers or users. Unlike in other jurisdictions, here offenders will likely see the same judge every time they appear. Tolosa, a lawyer, says this way the judges can get to know the defendants and can tailor a sentence to fit their personal backgrounds and criminal histories. The judges also specialize in certain criminal activities. One judge ruled in so many streetwalker cases he became known as the "King of Prostitution."

Most of the sentences involve some form of community service—cleaning streets, emptying trash cans, or erasing graffiti—but from there the judge can choose freely from a host of other penalties. Someone with a mental illness may be referred for psychological treatment. A teenager who steals might be ordered to spend time with another teen who committed a similar crime but now regrets it. Illegal immigrants who've been peddling fake Hermes scarves or Gucci bags on the street get referred to immigration lawyers, who tell them they are risking deportation and then suggest various legal paths to citizenship.

Tolosa's organization continues working with the clients long after they've paid off their debts to society. "We keep on helping them throughout their lives," she says. In one case, the center worked with a homeless man who was caught jumping a subway turnstile. He did several days of community service for his sentence, but was then offered the chance to enlist in a responsible fatherhood program. The man had lost custody of his ten-year-old daughter to the city, but after he passed the program and found a job, he managed to convince a court that he should get her back. "If he hadn't come through the Midtown Court and been sentenced to jail, he would have been back on the streets again," Tolosa says. "Instead we were able to say to him, 'You don't have to live like this. We have these programs.'"

In the decade-and-a-half since the program opened, the neighborhood around Times Square has seen a dramatic turnaround. It's a tourist mecca rather than the shabby, crime- and porn-ridden place it was in the 1980s. Of course many factors have contributed to this, but Tolosa is sure the court's alternative sentencing practices are among them. "We've turned the court system on its head in dealing with low-level offenders," she says.

Reader Responses to The Midtown Angel