Fruit of the Mandarins

I had never felt so lost in my life. And i was standing, more or less, in my own backyard.

The space behind my apartment building consists of an alleyway that twists into another lane, which twists into another and another, forming a labyrinth of squat apartment underbellies. I moved into this building over a year ago, and have developed the habit of standing back there often. It’s beautiful, I think, and peaceful, even if it always smells as if last night was fish night.

On this particular occasion, I had an audience. An old woman in flowery printed pants had paused while hanging her laundry to look at me. Nearby, a younger woman fixed me with unembarrassed eyes as she fished for something in her handbag. 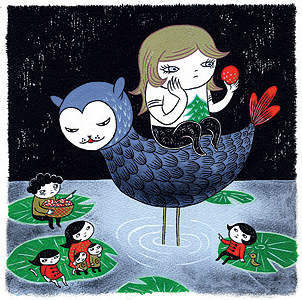 It was the middle of the day, Saturday, and we were the only people in the lane. The air was hot for May, and the heat felt oppressive on my shoulders. I was wearing pants, which didn’t help, but at least it wasn’t a skirt that I could have tucked into my underwear. My shirt was clean.

I didn’t recall having done anything suspicious, or irritating, or otherwise socially unacceptable, except perhaps muttering to myself a bit. I hadn’t even been standing there long. But the stares continued. Why were they looking at me? Would it be rude to ask? Would it be worse to suggest that I don’t like it? Have I done something wrong? And why am I getting so worked up about this anyway? The older woman shifted her weight towards me and, with a polite half-smile, gestured in the direction of the lane’s exit into the street. I was being shown out of our shared space.

Unable to think of anything else to do, I returned the half-smile, bowed my head slightly, and followed the woman’s hand toward the street. I walked to the entrance of my building, went up to my apartment, and closed the blinds. By now it was painfully obvious why the two women had been staring at me: I have blue eyes and freckles, and this backyard of ours is in Shanghai. This is not high-rise Shanghai, and were some other girl with blue eyes to show up in the lanes behind our apartment buildings, I would probably try to show her the way out, too.

Though being ogled, considered strange, and presumed lost happens to me regularly here, for some reason, I am still not used to it. It occurs to me only after the fact that these things happen because I am foreign here.

That seems to be a fixture of my life in Shanghai: As long as I stay here I will be foreign. Somehow, though, when I am observed this way, the feeling is newly bizarre and disorienting. Then I remember that the same thing happened the day before, and the day before that, and the day before that. But that doesn’t make the experience itself easier, this sense of being a stranger in my own backyard.

With the blinds closed, I go for the oranges on the table. I love oranges. Perhaps because I grew up in Florida, they feel like home to me. There is even a neighborhood in my hometown named after a variety of orange that once flourished there.

It’s called Mandarin. I’m not up on the history of fruit, but I believe that mandarin oranges are so called because their origin is in the place where Mandarin is spoken, where mandarins lived. It makes me wonder how far I’ve gone from home, mandarin orange in hand. I do not particularly appreciate being presumed lost on the sole basis of the color of my skin, but that old woman was trying to help me find my way. I wonder if she gave me better directions than we both had thought.

Marcy Nicks Moody is a writer based in London.

Reader Responses to Fruit of the Mandarins