A Killer in the Classroom

Novelist Jincy Willett takes no prisoners, and neither does the murderer in this black comedy about an adult-ed class gone bad. The Writing Classis an old-fashioned locked-door mystery in which strangers are trapped in a classroom with a sociopath in their midst. Willett plays by the old-school rules, leaving red herrings scattered about, enough clues to guess whodunit, and plenty of psychological twists to keep you hanging. 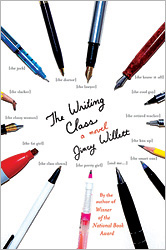 But she also brings to the genre a biting sense of humor, a quick wit, and even a dose of empathy. Fans of her early cult favorite, Jenny and the Jaws of Life: Short Stories and her 2004 parody, Winner of the National Book Award: A Novel of Fame, Honor, and Really Bad Weather, will enjoy heroine Amy Gallup, who maintains a website called "Go Away." On it she describes herself as "an aging, bitter, unpleasant woman‚ who spends her days editing unreadable text and her nights teaching and not writing. Sometimes, late at night, in the dark, she laughs inappropriately."

Overweight and clinically depressed, Amy guzzles red wine, wolfs down Heath bars, and reads like an addict to stave off her fears. Cursed with meteoric success as a young writer, she hasn't written a word in twenty years, so to pay the bills she teaches wannabe novelists and recent divorcés at a second-rate college's night school.

At least it gets her out of the house. A loner who hates to be alone, Amy has been widowed and then divorced; her closest friend is Alphonse, a phlegmatic basset hound who responds to one command only: "Doughnut!" He has the misanthropic appeal of E.B. White's legendary dachshund, Fred. Amy's appeal is similar. She's a case study in dysfunction, but she's a lot of fun to be around.

Plus, she has a real knack for running a classroom—until a prankster she dubs the Sniper starts stalking her students. One receives a venomous (and quite brilliant) parody of the suicide-note-cum-poem she'd read in class. Another finds a Halloween mask of serial killer Ted Bundy bobbling life like on a stick in the backseat of her car. When a student is found dead at the bottom of a cliff, Amy starts to worry.

She attempts to cancel the class, but her students refuse to disband. They're determined to unmask the Sniper. And Amy, against all her instincts and wishes, is sucked back into human company. In the end, that's what she is—good company. The same can be said of the book. It's good company, too.

Reader Responses to A Killer in the Classroom