What's so funny about racism, police brutality, and Hurricane Katrina? Plenty, according to African-American activist, educator, and actor Jon Mahone '99. He's the director of In House Freestyle, a Providence-based sketch-comedy group aimed at raising awareness about social issues affecting the black community. The group started five years ago, when Mahone; his wife, Ghislaine Jean Mahone; and a group of like-minded artist/educators began performing skits, music, and poetry in their living room. Since then, In House has moved out of the house and into theaters, schools, and community groups around Providence, using comedy to promote change. 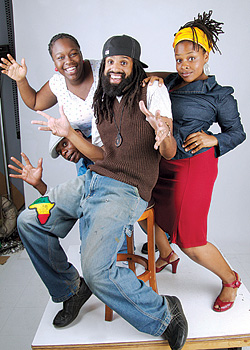 "For me, it's always been about finding the best way to educate people," says Mahone, who teaches writing at the Community College of Rhode Island. "With comedy, people let their guards down and let ideas come at them without getting defensive."

"There was a military recruiter in the cafeteria every day, but there was never a college recruiter," Mahone recalls of his highs chool days. "I thought, What kind of message is this sending to the students?" So Mahone created Snuggles to call attention to the military's intentional targeting of low-income youths.

In another popular sketch, a song-and-dance number called "Microwaved-ed Cake," the troupe addresses a subtler problem in the African American community—low-cost, sugary foods that can lead to such health problems as diabetes. "Black people are at the top of all the health-risk lists—high blood pressure, strokes, diabetes—and this is directly related to the highly processed foods we eat," Mahone says. These statistics may be sobering, but in the hands of Mahone and company, they become a catchy, toe-tapping music video. "They useda kill black folks, with lynching and slavery./Now they killin' black folks wit' yo local grocery," the group sings, in the style of an old minstrel show.

Armed with a DVD of their best material and a passion to educate and entertain, the troupe aims to take their show on the road. They're also looking to develop their issues-oriented comedy into a television show that Mahone describes as a comedic version of The Wire." We want to show how [African Americans] creatively over come obstacles," says Mahone. "We want to give people hope through comedy."

Mahone's sketches are online at inhousefreestyle.com .