Here's the thing about humans: it takes us a long, long time to grow up. At the start of this wry, poignant, and very funny coming-of-age novel, we meet Ms. Hempel, a young seventh-grade teacher whose students, deep in the task of discovering themselves, hover around her like moths drawn to the glow of her attention. They love that she'll sit on her desk and tell them (slightly edited) stories about her own teenage misdemeanors. She beguiles them with bad-girl tales of hanging out with skateboarders, dying their hair, and piercing her nose with a sewing needle. She presents these as obligatory cautionary tales, telling her students how she failed to reach her potential until she finally buckled down. Ms. Hempel loves telling these stories, because when it comes to finding herself, she's just a few steps ahead of her students. 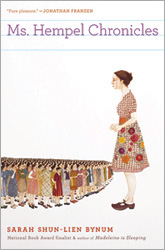 Ms. Hempel assigns her class Tobias Wolff's memoir, This Boy's Life, and frets about its profanity. But the kids thrill to a story so close to their experience, and even their parents fall under Ms. Hempel's spell. In sex-ed class she reads aloud from scraps of paper on which her students have scribbled anonymous questions; she matter-of-factly describes the consistency of semen and explains why a woman might enjoy oral sex. When a student asks who was the best lover she ever had, she blushes and flashes her engagement ring brightly, saying the answer should be obvious.

The answer, however, is not so clear. The teenage Beatrice Hempel may have quoted the Marquis de Sade on her yearbook page, but that was feigned sophistication. Her fiance's acrobatic sexual requests leave her feeling "exhausted and very far away from him, as if he were standing atop a flight of stairs and she were stranded at the bottom, too breathless to climb up." She fears she misled him and feels guilty at his disappointment.

Sarah Shun-lien Bynum's dreamlike first novel, Madeleine Is Sleeping, was a finalist for the National Book Award in 2004. Now, through eight interconnected stories, she gently but vividly depicts the journey from girlhood to womanhood. The young Bea is mortified by her irrepressible father's fierce loyalty and love. As a teenager, she flirts with danger—listening to punk rock on the radio, swilling cough syrup, and plotting ways to overthrow her boarding school. Half-Chinese, she glares when a teacher entreatingly looks at her, hoping she will speakup during a discussion of immigration.

For all her wishful depravity, Beatrice was and remains basically conservative: a lamb in wolf's clothing. Now an adult, she finds herself amid colleagues who nonchalantly admit that they cheated in school and casually have affairs with one another. Bea's beloved embarrassing father has died, and her mother and younger sister are plotting to turn the family home into a bed and breakfast. They want Bea to clean out her old room so strangers can sleep there. How she creates from all this a life that feels truly her own is the story of this winsome collection.